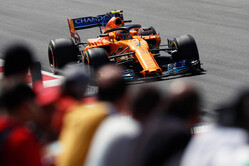 Both Fernando and Stoffel completed a good amount of mileage in an effort to comprehensively analyse and evaluate various components and parameters in preparation for this weekend's Spanish Grand Prix and beyond.

Neither driver reported any major issues, and the team condensed a solid amount of running and analysis into the two sessions, leaving the team both pleased with the productive day of track time and armed with a lot of useful information.

Fernando Alonso: "Seen from the inside, the upgrades we brought here are a step forward. There is more performance in the car - it felt better and there was more grip. Conditions were tricky today with the hot temperatures and especially the wind; we saw a lot of people going off track and I think it's going to be the same tomorrow.

"It has been a positive Friday and we've tested everything we brought here. There's still some debate about some of the parts, but we seem to be a little bit more competitive here than any of the other Fridays this season.

"We'll have a clear reference tomorrow about how much we have really improved compared to everyone else. It's going to be cooler and there's even a threat of rain forecast for Sunday.

"We possibly have a chance to make it into Q3 tomorrow, so let's try and maximise that."

Stoffel Vandoorne: "It's been a pretty good Friday for us. We had a very busy schedule in both sessions, with a lot of things to figure out across both cars, so it was pretty intense for the team but everything was very well-managed.

"The first feeling was positive today - it's still too early to read anything as the midfield still looks really tight, but I think tomorrow will be the day that counts. The tyre compound selection also won't be an easy decision to make.

"The conditions were very tricky out there and we saw a lot of mistakes on track, but we all had to deal with the same things and I felt okay in the car. Tomorrow, every tenth and every little bit of performance we can squeeze out of the car will be important for qualifying. It will be up to us to put everything together.

"The results today looked quite promising, but until we've pushed everything to the limit we won't know exactly where we are. We need to understand everything we've learned today, put the car in the best specification possible and see what result it brings. I hope this is the start of continuous progression, and that we can build our season from here."

Eric Boullier: "Today's practice sessions were always going to be about spending solid time testing the various new components we have brought to Spain this weekend - and that's exactly what we did.

"We completed a lot of useful mileage and conducted a number of comparison and correlation tests to evaluate their performance and send the data back to the factory.

"Overall, we're satisfied with today's work. Naturally, the more you test, the more data you have, and therefore the more number crunching there is to do. So, we'll be busy this evening analysing the information - not only to determine the programme for tomorrow, but also to help inform our development plans for the coming races."