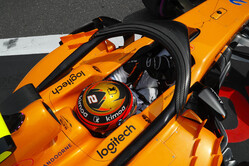 Fernando Alonso: "Last year's race in Baku was certainly a memorable one for us. It was a crazy grand prix and we scored our first points of the season there, so we'll naturally be looking to repeat that this weekend.

"Even though it's only been on the calendar for a short time, this circuit is already known among the drivers as a great racer's track. It's the fastest street track of the year and also one of the longest, so it's pretty tough on the car and the driver, but that's definitely part of the appeal.

"We know our limitations and where we need to improve our package, and, although we bring parts to test to every race weekend, we aren't anticipating a radical change in our performance in Baku. However, we're learning more and more about the behaviour of our car each time we step into the cockpit, and in Azerbaijan we'll be maximising everything we have as usual to score as many points as possible."

Stoffel Vandoorne: "Baku City Circuit is a pretty tough but also enjoyable track, and it's quite challenging for the drivers. You literally drive through the historic centre of the old town which was a really cool experience last year, and overtaking is tricky on the narrow streets.

"Saying that, we saw anything but a processional race last year and hopefully we can take advantage of any drama that this track throws at us next weekend. Last year was tough as the only real overtaking opportunity is at the end of the long straight, and it'll be tricky for us again, but we'll see what's possible with the MCL33.

"As well as making sure we set ourselves up on the right strategy, for me the start will be crucial on Sunday. I've not had the best starts over the last couple of races and with overtaking tough here we need to try to maximise our starting position. In China, we fought hard but I picked up some floor damage which made pushing ahead very difficult, so I'm looking forward to a tight battle in the midfield and progressing as much as we can in the race."

Eric Boullier, Racing Director: "On a track where drama and action seem to have become almost par for the course in Baku given last year's events, strategy will be a key factor in next weekend's race. We know our package tends to deliver more on Sundays, so the important thing will be to react quickly to anything that happens.

"We must keep our heads down, push hard and take any and every opportunity that comes our way. Both of our drivers have raced brilliantly in the first grands prix of the season and I know they'll be relishing the opportunity to maximise what they have underneath them in Baku.

"This fast, challenging street circuit has already become a welcome and exciting location on the calendar and we've witnessed some great battles. Overtaking is at a premium, so, while we don't underestimate the importance of our starting grid slots for Sunday's race, we're also looking forward to the challenge that racing through these historic city streets brings."

Straight-line speed and slow-corner grip: Downforce levels are the second-lowest of the year, after Monza, in an attempt to maximise top speeds along the pit-straight, where the cars are on full-throttle for 24s. The focus for the engineers is to shave off as much downforce as possible, while still working the tyres hard enough to keep them in their operating window.

Most demanding section: Turns Eight to 12. This series of left-right flicks alongside the medieval wall of Baku's Old Town is also the narrowest section of the track - just 7.6m at its narrowest point. The drivers have to be very precise with their steering inputs and throttle application, which is made all the more difficult by incessant camber changes and a sharp incline in the road.

Unique difficulty: The 2.1km/1.305-mile pit-straight produces the highest top speeds of the year. In 2016, Valtteri Bottas clocked 378km/h/235mph here, although speeds were slightly slower last year due to the wider-format cars. At these speeds the brakes cool dramatically, making braking for Turn One particularly difficult.

Braking: There are six significant braking events around the lap, the hardest being into Turn One, where the cars slow from very high speed. The rest of the lap is relatively slow (there are nine third-gear corners) and it's a delicate balance to optimise brake cooling.

Power: The cars use 2kg of fuel per lap, which is high, and without a Safety Car period the cars are unable to complete the race without a degree of fuel saving. It's also a demanding race for the ERS because there are long periods of full deployment.

Aero: Despite being a street track, Baku is a low-downforce circuit. In terms of aero package, it's the second lowest downforce package of the season, after Monza.