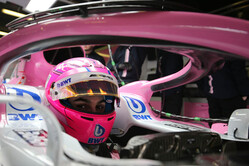 Vijay Mallya: "Baku will be an important weekend for us and we're determined to get back into the points.

"The first few races haven't delivered the results we were expecting, but this was mostly due to circumstances that worked against us. We were involved in first lap incidents that dropped us down the order in Bahrain and in China, and we didn't show our true potential. With such a closely matched midfield, it's very difficult to recover if you lose so much ground at the start of a race. On the positive side we've shown good progress with our car performance since Melbourne. We have made Q3 in the last two races and we understand the car more. It's time for our luck to turn and the results to follow."

Sergio Perez: "It only feels like yesterday we were racing in Baku, but I guess it's a bit earlier in the calendar this year. It's already a track with a big reputation and I have special memories from 2016 and our podium. It's a track where we have always been competitive so I want to go there this year and score points.

"The first few races haven't gone very smoothly for me. I think I've been unlucky, especially in Bahrain, but I know it sometimes happens in racing. The last race in China was really disappointing because I lost out on lap one and there was no way to recover to the points. Our pace was competitive and we took another step forward with the car performance, but things just didn't work out on race day.

"The progress we have made since Melbourne was visible in Shanghai and I'm feeling happier with the balance of the car now. We are catching up and getting back to our normal position. I think Baku will be interesting because it's all about good top speed and being confident on the brakes. I love the challenge of street tracks and I really enjoy driving in Baku."

Esteban Ocon: "Baku is a cool event. It's so fast with the longest straight of the year, which is quite unusual for a street circuit. It produced probably the best race for fans last year. I love the atmosphere of city races and it's a really interesting place to explore. I also enjoy the delayed schedule because we wake up later in the day and there is more chance to have a good night's sleep.

"My first race in Baku last year was pretty eventful. So much happened in the race and it was definitely a missed opportunity for us. We were competitive so I hope we can be quick again this year. The racing down the main straight was really cool and if you pick up a tow you can find a huge speed advantage. It is a place where you can go three or four cars wide, which is insane. It's not the sort of racing you often see in Formula One so it's quite exciting when it happens. There are good overtaking opportunities so you can make up a lot of ground even if you're at the back.

"Baku is definitely a great chance for us to score points. The car is improving with each race and I can see how hard everybody is working to find more performance. At every race this year we've had new items to test and it's the same this weekend. It's still early days in the season and if we can unlock the potential in the car I think we can be up there fighting consistently at the front of the midfield."