Boullier: We aimed too low 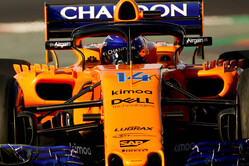 While Fernando Alonso proclaimed that Melbourne would be McLaren's weakest race of the season, going on to declare that the Woking outfit was targeting Red Bull, in reality the season opener was the team's best performance of the year thus far.

While in Melbourne the Spaniard and teammate Stoffel Vandoorne both finished in the points, Alonso coming home a strong 5th, in Bahrain, where both Red Bulls were eliminated early on and Kimi Raikkonen also retired, the Woking pair finished 7th and 8th. Last weekend, Alonso scored the team's sole points by bringing the MCL33 home in seventh once again.

Though the two drivers are well matched in terms of performance, thus far neither has made it through to Q3 on Saturday afternoon, in both cases Melbourne being the best qualifying result thus far.

Team boss Eric Boullier insists that the root cause is one-lap pace, the performance of the Red Bulls and Renault highlighting the difference between the Woking outfit and its rivals. Indeed, the Frenchman believes that in setting its initial targets, the team set them too low.

"The car has matched all the targets so maybe that means maybe the targets were not the right ones," he said, according to ESPN. "We need to revise, in terms of ambitions, what we need to achieve.

"The car is still very balanced," he insists. "If you listen to the drivers they are happy with the balance of the car. Whatever you try and setup the car reacts accordingly so a bit more understeer, less understeer, more oversteer, one tenth better here, one tenth slower here so I think we have a good understanding of the car.

"I think the car has no nastiness, if you want, in terms of the design. We just need to make the car faster around the corner and in the straight line."

However, the Frenchman insists this isn't simply about an aero fix.

"Well this is obviously one of the issues. Our top speed is not the best one because we are bottom in the ranking but it's not the only one. It's not as simple as this, you know.

"If it were a question of just driving the car it would be easy to fix so we have to address, I'm going to use the word fundamentally, all aspects of the car to make sure we are where we should be.

"We didn't turn up in Australia with the car we wanted because we were delayed for some reasons," he admits. "A lot of parts are on the way to hit the track, for logistic reasons it's very likely it's going to be Barcelona and from that point we will see performance-wise where we are."