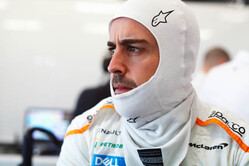 Having initially said that Melbourne would be the season low-point for McLaren and subsequently claimed that his team was ready to target Red Bull, indeed the 'big three', Fernando Alonso has today hit out at unrealistic expectations for the Woking team.

Despite being third in the team standings, benefitting from Red Bull's double retirement in Bahrain, there are concerns over the overall competitiveness of the MCL33, while elsewhere there remain doubts over the team as a whole, what with the ongoing lack of sponsorship and distinct signs it may have got it wrong in ditching Honda and its money.

However, a clearly frustrated Alonso today insisted that the team's performance in the opening races has been good, admitting to being exasperated by some of the criticism.

"I don't know exactly what people were expecting from one season to another when the regulations stay the same and there are three teams ahead of everyone," he told reporters. "Last year after three races we had zero points.

"Bahrain, last year, Stoffel didn't make the start. On the grid he was pulling the car into the pitlane. This year, two races, four cars to the chequered flag. This is a very good start," he insisted.

"Look at the facts," he said, "not the feelings or the wishes or the dreams."

Nonetheless, there is no hiding that the very issues faced by those teams mentioned, not least the double retirements of Haas in Melbourne and Red Bull in Bahrain, played into McLaren's hands.

Asked about the pecking order, he replied: "It's difficult to know, it keeps changing, track to track, as it depends on the circuit characteristics.

"I believe Haas still has a little bit an advantage in the midfield group," he admitted. "This is something we need to improve quickly. We need to do this as soon as possible."