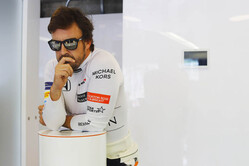 It's not entirely clear whether it was because neither of the MCL33s made it into Q3 or whether it was the impressive performance of the Toro Rosso duo – Pierre Gasly qualifying sixth - but in the aftermath of a relatively disastrous performance McLaren team bosses attended what some have described as an "emergency meeting".

Elsewhere, Fernando Alonso, who qualified thirteenth, just ahead of his teammate, played down the team's performance suggesting that rather than a raft of updates not proving beneficial, much of the problem is track related.

"I think they work as expected so I think the improvements are there and the car felt better than Australia," he said. "I think the nature of the circuit is far from ideal for our car.

"We came here looking at last year's performance and it was not great here," he continued, having previously said that Melbourne - where he finished 5th - would be the season low point, "it was one of the worst performance for us last year and unfortunately we saw today again it is a circuit that we don't have into our hands in terms of approach or setup or whatever. That was something that we need to analysing but the new parts of the car work fine.

"We know that we are not the strongest on the top speed and braking performance was also not great today," he admitted. "In terms of traction I think we also were struggling a little bit too much.

"Yesterday was fine, the long run pace was good, this morning was good also on the hot track and then probably we got too confident with that balance on the hot track. Then with the cooler conditions in the evening we had some negative surprises, and unfortunately we are now in a position to start the race that is not ideal.

"But we were not in Q3 in Australia either," he pointed out, "and then both cars were in the points on Sunday so hopefully we can repeat that."