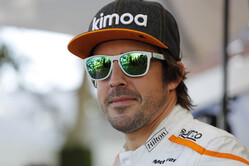 Having finished fifth in the season opener, and teammate Stoffel Vandoorne ninth, despite warning that it would be McLaren's least competitive performance of the year, Fernando Alonso is targeting great things for Bahrain and beyond.

Indeed, rather than looking to dominate the midfield, the Spaniard believes that the Woking outfit is now ready to start mixing it with the big three, Mercedes, Ferrari and Red Bull.

"We saw the potential of the car, we understood we had a good machine in our hands," he said ahead of this weekend's race. "Now is the time for McLaren to come back to the top positions, and to do so you have to compete against the best teams in the world: Red Bull, Ferrari and Mercedes.

"To be at that level we need to be better than them," he adds, referring to the need for McLaren to maintain a rigorous development programme, "and we need to close that gap as soon as possible. This will come with updates and clever ideas, and I'm sure we'll bring those very soon."