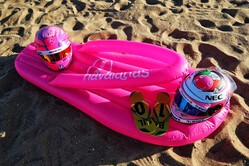 Force India has followed McLaren's lead in turning its mandatory Halo device into a sponsorship opportunity.

Earlier this week, McLaren announced that at the season opener the Woking outfit would take advantage of the safety device which has been compared to the upper portion of a flip-flop, agreeing a partnership with British lifestyle brand Gandys.

Now Force India is adopting a similar initiative as part of a new partnership with the original flip-flop brand, Havaianas.

"No longer will fans see a halo, but the strap of Havaianas' iconic footwear," declares the Silverstone-based outfit.

"We are delighted to bring Havaianas into Formula One," said Otmar Szafnauer. "Where better than the halo to carry the famous Havaianas logo?

"It's a savvy move by this loved Brazilian brand, which will bring a touch of the beach to the paddock throughout the season. We have always been an adventurous team with our marketing efforts, and after introducing the pink livery in 2017 we hope this partnership will appeal to all fun-loving Formula One fans in 2018."

"This is huge news for Havaianas," added Marcio Utsch, CEO of Alpargatas the makers of Havaianas. "We want to bring our fun and cool vibe to Formula One and the opportunity presented by Force India really grabbed our attention. At Havaianas, we pride ourselves on listening to the fans of our brand and over the last few months we have seen more and more people associating our flips-flops with the new halo across social media. Together with Force India we have come up with an eye-catching design on the car's halo, which was the logical place to locate our flip-flop strap. We are looking forward to engaging with Formula One fans at races around the world throughout the year, so stay tuned for some exciting developments."

The Havaianas flip-flop branding will appear at selected races throughout year starting from this weekend's Australian Grand Prix. It will also be present at several European races and most significantly at the Brazilian Grand Prix in Sao Paulo - the home of Alpargatas, the parent company of Havaianas.