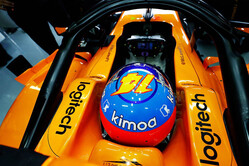 Fernando Alonso: "Finally, time to go racing! This isn't my first time racing this year of course - I've already done a 24-hour race in Daytona and have a very busy season ahead of me - but I'm really excited about getting behind the wheel of the MCL33 for the first grand prix of the year.

"Our car showed a lot of potential in winter testing and, although we know we still have a lot to work on, we've already learned a lot about the package and how all the new elements to this year's car work together. Australia is its first real test, and we need to work hard all weekend to bring all the ingredients together.

"Nobody can ever predict how other teams will perform at the first race of the season and that all contributes to the excitement. Melbourne is a great track and, after what feels like a long winter, I'm really looking forward to seeing what we can do."

Stoffel Vandoorne: "Melbourne is a really cool season opener. The first race coincides with my birthday, and I've got great memories from last year as it was my first grand prix for the team as race driver. Now that I've got my first full season under my belt, I'm heading to Australia feeling confident, relaxed and refreshed, and I can't wait to go racing again.

"I've been working hard all winter on my training and spending a lot of time with the engineers back at the factory to prepare for this year. Although the regulations have stayed relatively stable, there's still a lot to learn and our package in particular is very different from last year. It'll also be interesting to see both the drivers' and fans' reactions to the very first grand prix with the Halo.

"I'm really excited - it's the start of a new challenge for all of us. I'm keen to maximise all the track time we have on Friday to work on set-up to suit the circuit conditions and prep for the weekend ahead. We won't be getting carried away as we don't yet know for sure where we stand compared to the other teams, but now the winter is over we all can't wait to get started with F1 2018."

Eric Boullier: "A new season, and a new chapter for McLaren in 2018. With the many developments within our team over the past six months or so, it brings me great excitement and pride to see everything coming together and the new McLaren Renault MCL33 hitting the track in Melbourne.

"We didn't have the reliability we had hoped for in winter testing, but all the issues we faced have since been addressed back at the factory. There's a huge amount of work going on behind the scenes to ensure we leave no stone unturned in our quest to extract the maximum pace we can from our new package from the first race.

"Melbourne is a venue that the whole team loves going back to, to kick off the new season. It's a vibrant city, the fans are incredibly enthusiastic and there's that palpable ‘back-to-school' feeling of anticipation, where nobody really knows the form book until the lights go out on Sunday. We're not expecting miracles to be worked overnight - far from it - but what we do know is that we'll give it our all this weekend."

Toughest corner: Turn One. The cars approach this downhill right-hander at 300km/h (188mph) and scrub off 160km/h (100mph) in the braking zone, which is very bumpy. It's easy for the drivers to lock a wheel and run wide, compromising their exit onto the second DRS straight.

Unique difficulty: The track surface, which is bumpy and slippery. Grip levels improve as it cleans up and rubber gets laid down on the racing line, but there's less grip off-line, which makes overtaking difficult.

Biggest headache: Bumps, on both a micro and a macro level. Where the bitumen in the asphalt has worn away, the surface is more abrasive and harder on the tyre. But there are also lots of bumps, particularly on the start-finish straight, and that forces the engineers to soften the suspension.

Brakes There are seven significant braking zones around the lap, which places an emphasis on brake cooling. An added complication for the teams is that the weight of the cars has increased this year to 734kg - up 12kg from 2017.

Power The cars use 1.7kg of fuel per lap, the third highest of the year, which will force the drivers to lift-and-coast for a period of the race, if there's no Safety Car period.

Aero Maximum downforce, except along the two DRS zones - on the approaches to Turns One and Three.