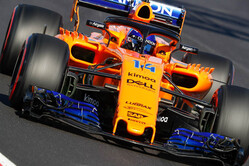 2017 marked the third year since McLaren re-partnered with Honda, the pair attempting to recreate the legendary dream team of the late 80s and early 90s but instead resembling a remake even more woeful than Nicholas Cage's take on The Wicker Man.

Having taken a step forward in 2016, certainly compared to a disastrous debut season in 2015, things actually got worse in 2017, the first signs coming as early as pre-season testing.

Signs of Alonso's pre-season desperation are clearly seen in the recent Netflix documentary Grand Prix Driver, but now the Spaniard has admitted that at season end, despite the promise of a new engine partner - Renault which took him to his two titles - he was seriously contemplating quitting.

"Yes, I did think about the possibility of changing series and stopping Formula 1," he told F1 Racing. "After I did the Indy 500, when I came back there were a couple of races in Austria, Silverstone, when I thought, 'Maybe next year I could try a different series; I could do full commitment to the triple crown and do Indy and Le Mans and maybe that's the best thing'. But I felt it was not the time for me to step out, not right now, not after these results, not with this feeling.

"There is unfinished business for me and McLaren together," he insists. "And I think this year is the time all these things will change. I feel pretty sure about that."

Asked if, following the nightmare of 2017 which saw him rack up record engine penalties, complete only 77% of the season's race laps, fail to make the start in Russia and finish the season outside the Top 15 for the second time in three seasons, he hopes 2018 will be more 'normal', he replies: "Yes... back to normality, back to this normal feeling of getting to every grand prix and preparing through practice and qualifying and knowing that you should be in the top five, and if you do well you could be on the podium. And if you do something really special, you could even be a winner. That motivation and that preparation have been the things I've missed. These are things that I hope to have this year. That's the biggest expectation."

Despite the nightmare that was McLaren-Honda, Alonso still rarely gave less than 100%, and while admitting to losing the 'buzz' last year, the Spaniard admits that a competitive package this year will likely see it return.

"I hadn't felt it for a while," he admits, "but now I feel i could do a very good season if we have a good package this year because I am sure I will be able to put in the 'extra' that I have put in all my career. That has been the most difficult thing to give to the team over the past three years: the commitment, the work, simulator feedback.

"That's something that comes naturally to a racer but to give extra when you're in Mexico and you have a power-unit penalty and starting last because of a 35-place engine penalty, things like the extra two-tenths or moves in the race - or maybe a magic start - don't come out. It's not conscious. It's just how you feel on the day."