Boullier: You have to take risks 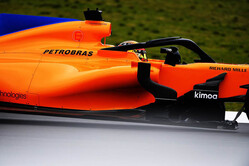 Fernando Alonso summed it up best last night when he described the final day of testing as "a bit of a rollercoaster".

Fact is the entire test was "a bit of a rollercoaster" as the MCL33 seemingly went from one stoppage to another when things were bad, to setting the timing screens alight and racking up the lap-count when things went well.

As was the case last year, the Woking outfit left Barcelona with fewer miles under its belt than any other team, nonetheless this year saw a 40.9% improvement in mileage, while rather than being 2.7s off the pace (as in 2017) this year Alonso was third fastest overall.

As for technical problems there have been many, ranging from errant wheelnuts to overheating, oil leaks to turbo failures.

It is widely thought that some of the engine-related issues the team is encountering is due to the aggressive approach the team has taken in packaging the Renault RE18 into the MCL33, however, team boss Eric Boullier defends the move.

"We have an ambitious design around the car and you can see that it is a little bit different from the other Renault-engined cars," he said. "So far we have had minor issues but I think that was because we didn't do a good job enough to prepare the car.

"We had a turbo issue this morning which was related to the chassis oil leak we had on Tuesday," he added. "It was a consequence. It is now under investigation.

"We had an ambitious design," he said, emphasising the point, "so we had to work with the time we had on the track and not in the garage to try to understand the cooling. We did a race simulation yesterday without any issues. In fact, we had only minor issues which were all different. A good rebuild of the car for Australia will help us to fix a few.

"The last three years were difficult. We are now trying to get McLaren back to where it should be. Like anything, you don't do it in one day. There are may be a few glitches.

"We have not lost our capability of designing fast cars," he insisted, "and I hope you will see it on track soon. We have to be ambitious, and to be ambitious you have to take risks."