Vettel ups the ante on a day of two halves 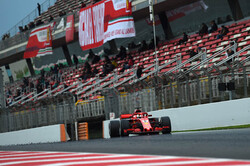 It was very much a day of two halves, with the morning session seeing some blistering laps from Sebastian Vettel, Kevin Magnussen, Nico Hulkenberg and Stoffel Vandoorne, while the afternoon was given over to race simulations.

Indeed, there were few improvements this afternoon, the most notable being Pierre Gasly's 18.363 which put the Frenchman third, just hours after having his morning time - which had put him second - deleted for missing the final chicane.

The morning clearly belonged to Vettel, the German finally bolting on the softest tyres in the Pirelli armoury and subsequently hitting all previous records out of the ball park.

However, while the German was grabbing the headlines leading to the usual tedious headlines about lap records - the only ones that really count being those set during races - Valtteri Bottas and Lewis Hamilton were lapping around a second a lap quicker than either Vettel or Max Verstappen on their respective race simulations.

That said, on a day where the 13 assembled drivers completed 1,624 laps, Vettel completed a mighty 187 and Verstappen just one less, the Mercedes completing 181 in total and the Renault pair 148.

The early pace-setter, Stoffel Vandoorne, went MIA for two hours before lunch raising fears that the MCL33 had encountered another issue, and while the Woking outfit was saying nothing, having completed a total of 151 laps it's fair to say the Belgian will go to bed tonight a fairly happy man.

At this point it's worth remembering that for a number of drivers, Vettel, Verstappen and Vandoorne being prime examples, this is their last chance in their cars before Melbourne, while the likes of the Mercedes, Renault and Williams duos still have another half day apiece.

If the timesheets have a strange look about them, suggesting that Melbourne could be a free for all, it's because of the different way the teams approached today.

While the likes of Ferrari were keen to show their hand and bolt on the softer rubber, Mercedes wanted to prepare for race day in Melbourne and the likes of Red Bull wanted to try updates.

Gasly's improvement to third was one of the few improvements of the afternoon, indeed he is the only driver who was in action this morning who actually subsequently improved his time.

Magnussen posted his best this morning on a qualifying run, but the very fact he did it on supersofts while those around him were using hypers gives the American team good cause for optimism.

Back to Gasly and it was another strong day for the new Toro Rosso-Honda alliance, the Frenchman completing 169 laps before handing over to Brendon Hartley for the final day. While he will be publicly continuing to show a face that suggests he's chewing a wasp, Christian Horner must be rubbing his hands together in glee.

Renault continues to mystify, between them Sainz and Hulkenberg racked up 148 laps, but even with the hypersofts fitted neither appeared to be really pushing it. Then again, having signalled its intentions in terms of grid penalties, perhaps the French team is looking to reliability above all else.

Another 148 laps for Sauber, courtesy of Marcus Ericsson. However, the car does appear to be a bit of a handful, witness the Swede being responsible for the only red flag of the day... indeed, the C37 has appeared to be drawn to the kitty litter like a magnet for much of pre-season testing, as Charles Leclerc will confirm.

Eighth and ninth on the timesheets would have some teams heading back to the drawing board, but that pace on the race sims, combined with the fact that those best times were set on the medium rubber suggests Mercedes remains the team to beat.

Other than a clear lack of pace, Williams really does appear as it is going to have a problem on its hands at some point this year. Fact is, Robert Kubica remains the quickest of the three drivers, and when Lance Stroll strapped on a set of ultras this afternoon he was still unable to match the Pole's best which was posted on supersofts.

While 159 laps demonstrates that the Force India has reliability, one has to wonder when the Silverstone outfit is going to follow Ferrari's example and show its hand. Hopefully, today's 19.634 - posted on the hypers - wasn't it, for it left Sergio Perez 2.4s adrift of the pace and with the midfield already looking to be cut-throat this season the team will need to have something up its sleeve it is to remain 'best of the rest'.

After Daniel Ricciardo's antics yesterday, today Red Bull put pace to one side and concentrated on reliability and updates, the Austrian outfit one of several teams to try new components. Though Verstappen was 2.66s off the pace, he completed 187 trouble-free laps, never feeling the need to go any softer than the yellow banded rubber.

Whether Kimi Raikkonen will repeat his 2017 feat tomorrow and leave Barcelona with the best time in his pocket remains to be seen, but while Vettel and Ferrari grabbed the headlines, Mercedes appeared to be doing the real business.