Ricciardo sets the pace as things hot up in Barcelona 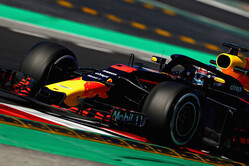 As Ricciardo and Hamilton go quicker than anything we witnessed in 2017, it's ironic that there is no lunchbreak during today's test at Barcelona, for its clear that a number of drivers are hungry...

Though cooler than yesterday, following a slowish start to the day, by mid-morning the action was really hotting up, as Lewis Hamilton and Daniel Ricciardo moved on to the supersoft and hypersoft tyres and the lap times fell accordingly.

However, along the way there was further anguish for McLaren, where, having completed 47 laps on his way to posting the fourth best time of the morning, Fernando Alonso's Renault engine suffered an oil leak leaving the Spaniard stranded out on track, smoke billowing from the rear of the car.

Indeed, the Spaniard can enjoy a leisurely lunch as his crew change his engine, a job that should see the Woking team lose another three hours of running.

No such issues for the usual suspects however, though Sebastian Vettel - third at what would have been the lunch break - opted not to get involved in the battle for lap time supremacy, leaving it up to Hamilton and Ricciardo.

In case you were wondering, Kimi Raikkonen should have been in the car today but phoned in sick leaving his teammate to continue where he left off yesterday.

Hamilton was first to up the pace, confusing things by subsequently switching to unmarked tyres on which he went even quicker. However, it was subsequently explained that these were in fact mediums that had been produced in a different factory.

As Hamilton raised the benchmark ever higher, eventually Ricciardo joined in the fun, and around thirty minutes before the break that wasn't banged in his 18.357, quicker than anything seen here last year - as was Hamilton's previous chart-topping 18.400.

However, while the Australian was on hypersofts, the Briton was on Ultras and third placed Vettel, 1.1s off the pace, on softs.

Other than that a fairly quiet morning, though one which saw the ten drivers complete 645 laps between them.

Carlos Sainz has completed the most thus far (88), while Romain Grosjean has completed 51, Brendon Hartley 53 and Esteban Ocon 54.

Interestingly, though 1.6s off the pace, Sainz' best time was posted on mediums.

Having spent much of the morning at the foot of the timing screen - which for some reasons shows Raikkonen as having done 2 laps - Lance Stroll eventually posted a 20.349 to go seventh, leaving Charles Leclerc in tenth 2.871s off the pace, albeit on the supersofts.

This afternoon, Hamilton hands his car back to Valtteri Bottas while Sergey Sirotkin and Nico Hulkenberg take over from Stroll and Sainz respectively.