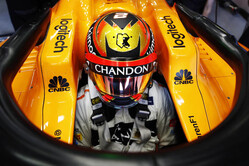 The teams reflect as the first day of the second pre-season test comes to an end with 1,146 laps completed.

Ferrari set to work on the dot of 9, the Sebastian Vettel doing some laps fitted with sensors to acquire data linked to the aerodynamics.

After that came some relatively long runs, switching between the soft and medium compound tyres. It was on the latter that the German set his fastest time in 1:20.396, on his 66th lap.

"It was a good day's work," said Vettel. "We managed to get through our programme, even if the conditions weren't always ideal, because of the wind."

Mercedes kicked off its second week of testing with a productive day's work. In considerably improved weather conditions, the W09 ran for a total of 824 kilometres, with Valtteri and Lewis both completing similar mileages.

Valtteri ran through a series of fundamental set-up changes on the day, as the team worked to understand how the tyre compounds react to these changes. Lewis worked on a number of recovery strategies for potential sensor failures and tried out aerodynamic bodywork parts for the upcoming season.

"The conditions today were much better than last week and we're all really happy about that," admitted Bottas. "We got lots of valuable data today. This morning we focused on medium to long runs, trying different mechanical setups of the car.

"In these weather conditions we start to really work the tyres and we had a few issues to manage. So we had a few more challenges with the tyres than we had last week, but at least now they can warm up.

"We keep discovering more about the new car, learning how it reacts to different settings. We did more than 80 laps - so more than a race distance, a really good mileage. The car was very reliable, I really enjoyed being back in the car and I'm looking forward to continuing tomorrow.

"It's been a good day," added Lewis Hamilton. "We've got through everything we needed and put good mileage on the car - it's been productive.

"The biggest challenge we faced today was to get the tyres working properly on this new track surface. The medium tyre was difficult to get working; the soft tyre is better for warm-up, but suffered with degradation. But we are learning all the time.

"Overall it's been a good start to the second test although there is not a whole lot to say at this moment. We have not worked too much on fine-tuning the set-up as we're mostly still gathering information. In the next couple of days, once we get into the long-runs and some shorter qualifying-style runs, we will get a better idea of where the car is."

Max Verstappen kicked off REd Bull's final week of testing by powering through 130 laps on his way to the day's third best time. The Dutchman logged his lap of 1:20.649 midway through the morning on the medium compound tyre to finish just under three tenths of a second off top spot for the day.

His afternoon session was interrupted by a stoppage on track but the team was able to rectify the issue and Max returned to the circuit shortly before the chequered flag.

"It was a good day today," said Verstappen. "We did a lot of laps and that's really important, just to put mileage up on the car," said Max. "We had a small problem with the battery late in the day, so we had to change that and it takes a bit of time, but afterwards it was all good. The car feels good.

"Everyone of course wants to know where we think we are in relation to our opposition but honestly it's impossible to tell until we get to Australia, as you don't know what everyone else is doing. In terms of where this car is improved over last year, again it's very difficult to say as the new surface here changes how you drive and that, together with the new tyres, makes it difficult to pinpoint any particular area. Also, with the first week not being that successful in terms of temperatures and so on, it's still all to be discovered. I know it feels faster though!"

"We had a good start to week two," added Head of Race Engineering, Guillaume Rocquelin. "We got through 85 laps in the morning and everything was running very smoothly. We got a long way through the test programme then, so we were able to try out some things in the afternoon and we took the decision to do some shakedown tests and the result was small electrical problem.

"We lost an hour as we had to change the battery but it was a calculated risk and we learned something as a result. In all, I'm pretty happy with the amount we got through today. Even though we're not chasing it, the performance was decent too, so let's hope for more of the same when Daniel is in the car tomorrow."

"It was a really positive day overall from the performance side," said Pierre Gasly, "we had a small issue this afternoon with the brake system which took longer than expected to fix, so we didn't run as much as I would have liked - that's part of testing though! So far everything has run perfectly, the car was pretty nice and we made some improvements compared to last week, so we are headed in the right direction."

"We had a reasonably productive morning where we were able to do some running in more normal conditions compared to last week," added James Key. "Pierre was happier with the car, we have made a lot of setup changes from what we learned last week. The engineers have done well to pull the analysis together in the short time between tests and find some promising directions. We also did a bit of work on the aerodynamics side taking further measurements first thing then moved onto more chassis setup tests and initial investigation into tyre performance in the warmer conditions.

"Unfortunately, this afternoon we suffered a brake system issue on the chassis side which was difficult to trace and took a long time to address, needless to say it is important to ensure any issues with critical systems are dealt with correctly and as the afternoon went on time became increasingly short to get the car back on track. Sadly we missed some running this afternoon due to that problem, however we will work overnight to make sure that we are ready and set for tomorrow.

"We apologise to the drivers and Honda for missing a good opportunity of running this afternoon and getting through more the long test item list we still have, however we need to put that right for the rest of the test and make good use of the remaining three days."


"The first day of the second pre-season test got underway in Barcelona under blue Spanish skies and much warmer temperatures than we experienced last week," added Toyoharu Tanabe, Honda's F1 Technical Director. "It means that conditions on track were much closer to those we will experience at the races.

"Last week we concentrated on data acquisition and systems checks and, from today, our programme is more race focused.

"Unfortunately, we have lost some track time, stopping running in the afternoon because of an issue on the car. Identifying problems like this is what testing is for and we will make further preparation to make up the lost time over the remaining three days."

Kevin Magnussen, who was keen to build upon his 132-lap total from last week's test session, rolled out of the garage promptly at 9 a.m. local time for some reconnaissance laps before a 15-lap timed drive on the medium tire. A switch to the softs was subsequently made, whereupon Magnussen performed three stints totaling 31 laps. It was during the first of those runs on softs where he posted his quickest lap of the day – a 1:21.298 on his 23rd lap.

Track time in the afternoon was ceded to an ERS (Energy Recovery System) related component issue. Time spent in the garage meant a shortened run plan, with Magnussen returning to the track with just over an hour remaining in the session. Working on a race simulation, he started with a 16-lap run on a used set of supersofts before pitting for a new set of softs which he ran for 17 laps. A final, 12-lap stint on new supersofts took his lap total to 96 for the day.

"It was a good day," said the Dane. "We got a lot of laps done. We started working properly with the car, and not just doing systems checks, installation laps and aero runs. I'd say it was our first proper day, also with the weather being a bit warmer and representative of what we're probably going to have in the season. It's still not quite there, but it's getting closer. I'm happy and positive after the day."

"A productive day today," aded Guenther Steiner. "We had a few small problems, but they are normal in testing, so I would call them minor ones and we got them sorted. We almost did 100 laps, which if we keep on going like this, we'll be fine."