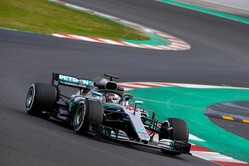 Though it is far too early to start drawing conclusions, it's fair to say that Lewis Hamilton, Toto Wolff and the rest of the Mercedes crew will head into the weekend finding it hard to supress broad grins.

While Valtteri Bottas set the pace for much of the morning, completing 60 laps in the process, teammate Hamilton ramped things up in the afternoon, finally getting some time in the W09 following those 25 brief laps on Monday.

With Sebastian Vettel finishing third on the timesheets - behind Stoffel Vandoorne - it wasn't merely the 0.908s gap between the two world champions but rather the fact that the Briton posted his best time on mediums while the German had to resort to softs.

After the non-event that was Wednesday, when snow stopped play, today the teams buckled down and got some serious lappery under their belts.

Between them the 15 drivers completed 1,101 laps of the Spanish track, with Pierre Gasly responsible for 147 of them.

Indeed, in one of those strange twists of irony, as Toro Rosso, along with new engine partner Honda, topped the mileage stats, between them Vandoorne and Fernando Alonso, who drove the last couple of hours, just about out-did them, the MCL33 completing 161 laps. A year ago McLaren managed just 208 laps over the whole four days of the first test.

The day saw a number of red flags, and while a couple this afternoon were false starts, Max Verstappen's off with around two hours to go will have left the Dutch driver and his team frustrated.

Not posting his first time until three hours into the day, Verstappen was immediately on the pace. However, there followed another long period in the garage before he finally reappeared only to head off into the gravel at T12 shortly after improving to ninth. In an attempt to extricate himself from the kitty litter the youngster put the RB14 in reverse but only succeeded in further embedding the car.

After a slow start to the week, Haas will be delighted to have finished fourth on the timesheets, Kevin Magnussen completing 96 laps on his way to posting a 20.317.

A foggy start to the day and a track still damp from overnight rain eventually gave way to a little sunshine and temperatures reaching a heady 16 degrees, hence the improved lap times on Monday.

With the second test getting underway on Tuesday, with this week being about reliability and consistency, we can expect next week to be about pace also.

While Mercedes looks set for an easy weekend, the midnight oil will be burning at Maranello, and also at Milton Keynes, Silverstone and Hinwil.

As we said, far too early to start drawing conclusions, though other than the fact that Mercedes once again looks to be the benchmark, McLaren and Honda both appear to have taken a significant step forward... though not together.