Gasly sets the pace on final morning of opening test 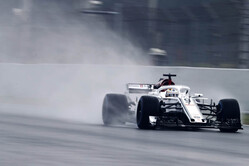 Yesterday's snow and rain gave way to fog at the Circuit de Catalunya this morning, but that wasn't going to prevent the ten teams making up for lost time.

Barely had the lights gone green than there were six drivers on track, and within fifteen minutes all bar Bottas had been out.

With the track still wet following overnight rain and a further shower this morning, much of the initial running was on full wets before, almost two hours into the session, Bottas and Vettel were the first to switch to Inters.

Two hours later, just moments before what should have been the lunch break but which has been abandoned, Bottas was the first to fit slicks, the Finn heading out on a set of mediums. Other drivers followed suit with Hulkenberg switching to softs.

While it is no surprise to see Bottas at the top of the table, over the course of this morning's running we've seen Magnussen, Ericsson and Gasly enjoy their moment in the spotlight.

Half an hour before the break, with just a handful of installation laps under his belt, Verstappen posted his first time of the day, and his 33.16 was good enough to snatch the top spot from Hulkenberg.

Though the switch to slicks in the moments before lunch saw a flurry of fast times and a continual rearranging of the order, Perez remains rooted at the bottom of the timesheets having completed just 11 laps with a best time 14s off the pace.

After a miserable couple of opening days, Sauber is looking a lot stronger today even though a twitchy rear end saw Ericsson in the kitty litter and bringing out the red flag. That said, with 72 laps under his belt the Dane and his team will feel buoyed heading into the afternoon when Leclerc is due to take over.

Another decent morning for Toro Rosso and McLaren, while Renault, who changed Hulkenberg for Sirotkin mid-morning, also continues to show promise.

Though no further rain is expected, temperatures are not expected to improve and as a result teams might opt for longer runs and consistency this afternoon.

Either way, following yesterday's shambles it's good to see the teams putting on a show again.