Farcical day ends with one time on the board 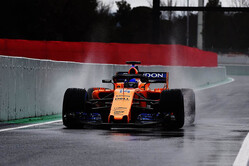 A day after F1 announced revolutionary plans for the broadcasting future of the sport, some of the leading players gave a clear demonstration of that aspect of the sport that really needs some revolution.

It was clear last weekend that the storm that was heading towards Europe from the east had no intention of leaving out those countries that line the Mediterranean, with rain and snow forecast to hit the Barcelona circuit this week at the same time it was due to hit France, Germany and the UK.

At the last possible moment - as temperatures dropped, the skies darkened and all manner of wet stuff began to fall from the skies - the sport's powers that be finally appeared to appreciate the significance and looked for a way to work around it.

While Williams has the track booked for a filming day on Friday, officials sought to get agreement from all the teams in order that either this week's test could be extended to Friday or perhaps next week's test could start early.

Ignoring the fact that either change would cause problems for the assembled teams, not to mention the media and others, the fact is that with pre-season testing so severely limited these days the teams and drivers need all the track time they can get.

However, the same mentality that has scuppered so many ideas in the past prevailed and because of the objection by (a rumoured) two teams , not only has the extra day been turned down, but today fans were treated to hour after hour of nothing.

With the first three hours of the session compromised by the fact the medical helicopter couldn't take off, such was the visibility, once the all-clear was given over the remaining six hours we were treated to five drivers completing the grand total of 17 laps, only two of them timed.

While McLaren and Fernando Alonso can celebrate the fact that the MCL33 topped the timesheets, today was not a day when the sport covered itself in glory.