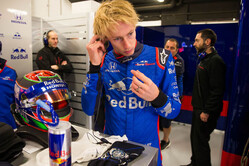 Admittedly it's early days, with a long, long way to go, but Red Bull will come away from today's opening day of testing with a big grin on its face... and deservedly so.

Not only did Daniel Ricciardo post the best time of the day, the Australian completed the most laps, ending the session with 105 under his belt.

In terms of the weather it was a day of two halves, much to the frustration of Lewis Hamilton, Carlos Sainz and Sergey Sirotkin who only ran this afternoon, as the skies darkened, the winds picked up and rain began to lash the Spanish track.

While a couple of teams opted for early baths, Ricciardo was one of a number of drivers who stuck it out to the bitter end, first switching to Inters and finally full wets.

For the most part it was an uneventful day, save for a couple of red flags this morning.

The first was for Fernando Alonso who suffered a wheelnut failure which caused the Spaniard to spin off into the gravel at the final corner. He was able to get out again just before the break and by close of play had completed 51 laps and posted the fifth best time of the day - a far cry from last year when he managed only 29 laps and was tenth of eleven.

The other off was for Nikita Mazepin who also spun off, albeit at T4. Whatever the cause of his spin was, the youngster didn't appear again, the Force India drivers having completed just 22 laps.

Based on this morning's evidence, Mercedes continues to look the benchmark, while Renault appears to have taken a major step forward.

While McLaren - other than the wheelnut issue - also appears to have made progress, the big talking point has to be the performance and reliability of the Honda now that it is sat in the back of the Toro Rosso.

Between them the thirteen drivers completed 725 laps, though this would have been a lot more had conditions allowed.

With few obvious technical issues and lap times up on last year - Ricciardo's best - posted on mediums, 1.586s up on the best time posted on the corresponding day last year (Hamilton on softs).

With the poor weather set to continue into the week there is talk that the test could be extended to Friday but this has yet to be confirmed.