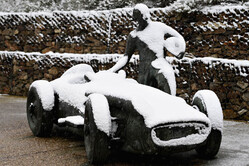 As weather conditions cause the teams to sit around and kick their heels, McLaren's Eric Boullier says he believes F1 should bite the bullet and carry out future pre-season testing in Bahrain.

The teams arrived this morning to find much of the circuit under a blanket of snow, as the south of Spain suffers like much of the rest of Europe.

Though the actual track is snow free, it is damp and slushy and the threat of further rain in the day has hardly boosted enthusiasm.

However, that's not the reason why the cars are not running, for the fact is that the poor visibility means the medical helicopter cannot take off and as a result there can be no running until conditions improve.

In recent years Pirelli has pushed for pre-season testing to be carried out in Bahrain, where dry running is guaranteed, but a number of teams have regularly rejected the idea on costs. On the other hand, should a driver crash or a component fail, it is far easier to get components to Spain than the Middle East.

Having lost running time on Monday and Tuesday, Eric Boullier is particularly frustrated and feels now is the time for the sport to bite the bullet and schedule future pre-season testing for Bahrain.

A move to extend this week's test by a day or even start a day earlier next week is understood to have been rejected, for with unanimous agreement needed for such a move it is understood two teams vetoed the proposal.

"It's obviously wasted money," he continued. "We tried to save costs and only go for eight days of testing. We need these eight days to offer a decent show on track from race one and covering reliability issues and other things we need to cover.

"We spend the money to be here and the track is booked for two weeks anyway so we had the possibility to move this day to another one later - we know the forecast is better on Sunday - so it is purely wasting money for selfish interests.

"On the other hand, it is true you can never guess the weather months before - going to Bahrain is obviously guaranteed to have good weather and was suggested again months ago. For economic reasons it has been rejected by some teams but I think we need to seriously consider going back to Bahrain. It is on our way to Australia so logistically there is maybe some mechanisms we could use all together to save money to compensate the travel.

"We will try to run the car, even if it is in heavy wet conditions. It is still snowing so the helicopter is not here and there is no medical service and security so we are not allowed to go out of the garage."