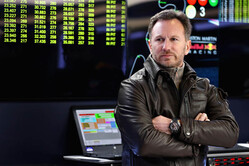 While the first day of testing told us little about the pecking order for the season ahead, especially in the midfield, it was clear that off track the political side of the sport will be as competitive and cut-throat as ever.

While most teams keep their heads down, battle lines are clearly being drawn as Mercedes and Ferrari adopt their stance and McLaren and Red Bull clearly ally themselves with the sport's new owners.

Be it the 2021 engine rules or the much-anticipated redistribution of the prize pot, the battles ahead will be more hard fought than anything we are likely to see on track.

Showing that the winter break has done nothing to alter his view, Christian Horner pointed to last week's launches as proof that Mercedes and Ferrari are forming an (unholy) alliance.

"Sometimes it is difficult to tell which is which," he told Sky Sports. "For the last couple of years there has been a very tight relationship between Ferrari and Mercedes.

"They even broadcast each other's launches and things like that these days," he added with a grin, referring to the fact that following the launch of the German team's contender at Silverstone, media and guests were treated to relayed coverage of Ferrari's launch from Maranello.

Echoing Zak Brown's call to Liberty to ignore the posturing from Ferrari, which has threatened to quit the sport, and Mercedes, and finalise its plans for the sport post 2020, Horner continued: "We are focused on going racing, things that we can control, there are new owners in Formula 1 in Liberty and they have to decide what they want Formula 1 to look like moving forwards.

"I'm sure they will lay out their road-map and plan during the course of this season and we will go from there. But of course there is going to be a lot of posturing and positioning and you can see that has already started in certain quarters."

The Red Bull boss subsequently expanded on his views during the post-session press conference.

Asked what was on his wish list for 2018, he told reporters: "I think to come out with a clear set of engine regulations for 2021. That's the longest lead-time item.

"That's the element that needs dealing with the quickest," he continued, "the rest you can deal with as you go along.

Eyeing the 'alliance' between Mercedes and Ferrari, he urged the FIA to stand strong with Liberty.

"It really needs alignment between the commercial rights holder and the governing body," he said. "As soon as they are on the same page it becomes irrelevant what the teams want. First things first, they need to align themselves and then present what they want the regulations to be, particularly as far as the power units are concerned.

"We've got interested parties sitting outside Formula One," he continued, a clear reference to the likes of Aston Martin or indeed anyone willing to supply a competitive, cheap engine to his team, “and again, timing is crucial for them if they are looking at entering F1 in 2021.

"Liberty had a positive first year, they did a lot of good things around the sport. But a lot of that is window-dressing it's not dealing with the fundamentals of the product. The next 12 months is going to be a crucial 12 months for the FIA and for Liberty, where they've got to get on the same page and then present what they want to do and what they see Formula One as from 2021 moving forward.

"That is so important to the entrants to know what they're signing up for."