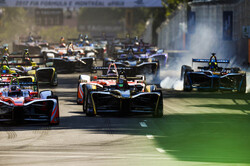 A year out of the limelight has clearly done nothing to diminish Bernie Ecclestone's ability to stir things up.

The sage of smoke and mirrors, the duke of divide and conquer is at it again, and much like Toto Wolff opined last year, has managed to lob a grenade into the F1 paddock just as pre-season testing gets underway.

Speaking to reporters in London - or holding court as it was known in days gone by - the sport's former supremo suggested that F1 should go electric.

"We still own the name Formula One, we still have contracts with promoters, let's make different types of cars, let's speak to the manufacturers and start a new all-electric F1, a Formula One for the future," said the man who fought tooth and nail against the introduction of the Hybrid formula.

Ecclestone's comment comes at a time manufacturers are forsaking other series for Formula E, the all-electric series which, though it has yet to convince the fans, appears to be the blueprint for the long-term future of motorsport.

However, rather than moving to Formula E, Ecclestone believes that Formula One should itself be considering an all-electric future. Furthermore, suggesting he has learned the lessons of the past, as Liberty Media faces not only its full season in control of the sport but also a fierce battle with the teams and manufacturers over the engine rules and prize money from 2020, the Briton suggests an entirely new commercial model for the sport moving forward.

"Can't we do this?," he ponders. "The manufacturers provide the cars themselves but we aren't going to pay them because they get massive worldwide publicity," he suggested.

"It would be a super Formula E, if you like," he added. "You can make cars be like an F1 car and the only thing you would miss would be the noise and I do not believe that people could not come up with something to make more or less the old F1 noise.

"They would need to have the balls to do it today," he said of Liberty. "I think they will have to do it."

Of course, should Liberty opt to follow his advice and go all-electric, it would never occur to Bernie to start his own series featuring gas-guzzling, noisy V8s or V10s.