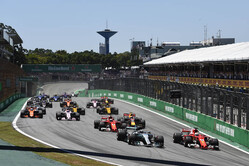 While the world's media focusses on the contentious issue of F1 and grid girls, away from the spotlight it has been revealed that the sport's revenues fell by £13m in Liberty Media's first year at the wheel.

While £13m might not sound a lot when one considers the figures usually being bandied around the sport, it is significant and looks likely to herald further unrest among the teams.

In a letter to shareholders Liberty revealed that that "Formula 1 revenue for the year ended December 31, 2017 is expected to be down approximately 1% as compared to the prior year period.

"Full financial statements for this period will be filed on or before March 1, 2018," it added, "and prior to such time Liberty will not provide any additional details."

A number of factors contributed to the loss, not least the absence of the German Grand Prix, then there was the loss of sponsors Allianz and UBS, neither of which Liberty has managed to find a replacement for.

At the same time increased spending by Liberty, including a new London HQ and Ross Brawn's ever-expanding technical team, has taken its toll.

According to the Independent: "The letter to shareholders doesn't reveal the impact of the decline in revenue but F1's results for the nine months to the end of September showed that its operating loss doubled to £50m ($70m)."

Hardest hit are Ferrari and Mercedes as their on-track performances and special bonuses mean they get more money than their rivals, but the other teams will feel the impact.

Under the guise of the proposed engine rules for 2021, Ferrari, Mercedes and Renault have already expressed unease, the Italian team even raising the prospect of heading to a breakaway series.

However, engine rules aside, it is money that matters, and Liberty's yet to be revealed plans for a significant shake up to how the prize pot is divided looks set to put a number of teams on a collision course with the sport's new owners.

News that the prize pot is already is decline is hardly likely to calm the waters.