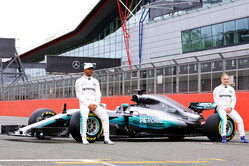 Following Ferrari and McLaren, Mercedes and Toro Rosso have announced their launch dates.

The world champions - already odds-on to retain both titles this season, thereby moving a step closer to Ferrari's record of six successive constructors' titles - will take the wraps off the W08 on February 22, the same day as 2017 rivals Ferrari.

Meanwhile Toro Rosso has an event planned for February 25, the eve of the opening test at Barcelona.

While Ferrari and McLaren, have yet to confirm if their launches will be live events or merely online - as has become the norm - Toro Rosso is clearly intending to reveal the STR13 - which will feature the Honda engine - at the Circuit de Catalunya.

Mercedes, on the other hand, will unveil the W08 at Silverstone - the German outfit admitting: "We know this is the same day as our friends in Maranello, and we are working closely to ensure that there are no significant clashes between our event schedule and the planned online broadcast from Italy! We'll be watching it just as closely."

Following the unveil, the W08 will complete a 100km shakedown.

With so much anticipation surrounding the launches, one wonders why Formula One Management, in league with the teams, can't arrange an event where all the cars are unveiled and presented to the public, said event televised and thereby giving the sport a boost before the serious business gets underway.

Indeed, at a time there is doubt over whether the street events planned at four locations this year ahead of Grands Prix will actually feature F1 cars in action, the teams unhappy with the costs they incur, surely a mega event head of the season featuring all the teams and drivers - even Lewis - would make sense.

Indeed, our very own Max Noble suggested just such an idea last year.