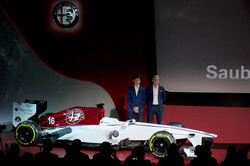 Having done a U-Turn of Theresa May proportions in backing out of its Honda engine deal for this year, Sauber has instead forged even closer links with Ferrari.

Having run a year-old Ferrari engine in 2017, this year the Swiss team will benefit from the latest specification power unit to come out of Maranello.

Furthermore, the Swiss cars will sport the logos of Alfa Romeo, which will also be incorporated into the team's name, the legendary manufacturer, part of the Fiat Chrysler group.

Having run Antonio Giovinazzi in the opening races last year, the Italian deputising for Pascal Wehrlein, the Hinwil outfit will this year run F2 champion, and leading light of the Ferrari Driver Academy, Charles Leclerc.

This, of course, is in addition to the close ties the Italian manufacturer has with American newcomers Haas which involves a lot more than simply supplying engines.

At Mercedes, Toto Wolff can see the benefits of such a move and admits he would not be averse to running a similar B-team type operation.

"I think what Sergio Marchionne and Maurizio are doing is very clever," he told ESPN. "They've had a good relationship with Haas. That has helped Haas and helped Ferrari and what they are doing now with Sauber is very visionary.

"With Fred Vasseur he has a team principal on the other side who knows the business inside out and it can be an alliance that can be dangerous for us."

"It's something that we are considering," he said of entering a 'relationship' with another existing team. "It's not easy because you don't want to distract your own organisation with a collaboration with another team on the other side.

"We are not the only ones who are having intelligent ideas," he admitted, "we are having discussions but nothing is done yet."

The most likely candidates would surely be Force India, where, Mercedes protege, Esteban Ocon is serving a worthwhile apprenticeship.

Though Wolff was previously a shareholder in Williams, it is thought the Grove outfit might be too precious in terms of its independence to agree to such a move. Though the predicted pairing of Sergey Sirotkin with Lance Stroll this year suggests money could be an influence.

Then again, in F1 isn't it always?