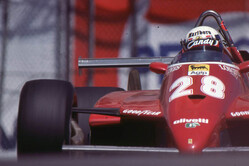 Imola 1982: An F1 controversy that keeps on rolling

Every F1 fan knows the story of the 1982 San Marino Grand Prix. The story of how Didier Pironi duped his unsuspecting teammate Gilles Villeneuve in a desperate, last lap manoeuvre has become part of motor racing folklore. But a new biography relating events of that long ago day is set to turn the story of this infamous race on its head.

Pironi: The Champion That Never Was by David Sedgwick is set to shed new light on those extraordinary events thirty-five years ago. "What happened to Didier after that race was nothing short of scandalous," asserts Sedgwick. "His reputation never recovered. Even now, all these years later, the name Didier Pironi can trigger some very unsavoury reactions."

Running comfortably in first and second place that day in front of an ecstatic home crowd, the Ferrari 126C2s of Didier and teammate Gilles Villeneuve were running down the laps to the flag. Everything was going smoothly. The Renault turbos had, as ever, imploded long ago. And with the FOCA teams boycotting the race, Ferrari was set for a famous one-two victory. Forza Ferrari!

Such was their superiority the two Ferrari drivers were putting on a show for the 100,000 crowd, slipstreaming one another into the Tosa hairpin as the laps went by. The crowd was thrilled. Just a handful of laps remaining to the flag and either Ferrari man could win the race, or so it seemed. This is where things become complicated.

In the cockpit of Ferrari number 27 Gilles Villeneuve assumed the Ferraris were indeed putting on a show for the crowd, taking part in a co-ordinated procession to the flag. The Canadian also assumed he would take the victor's laurels come race end. Was he not the team's senior driver?

However, in the cockpit of the number 28 Ferrari Didier Pironi's thoughts were of an entirely different sort. The Frenchman was playing to win.

Each time he managed to squeeze his 126C2 into the lead, Pironi upped the pace obliging his partner to follow suit. If this was indeed a show, a piece of theatre strictly for the fans, nobody seemed to have told the (1978) Le Mans winner.

"Didier had been waiting for the Ferrari pit to show the 'OK' sign - the signal that the cars should hold places," explains Sedgwick. This 'OK' message was absolutely crucial, the sign that the Ferraris should hold their current positions until the end of the race, to not overtake. The pit board would have thus shown the message:

This particular message never materialised. Instead, the Ferrari board somewhat enigmatically displayed the word 'SLOW'. Precisely what 'SLOW' meant in this context is not entirely clear.

Into the last lap the Ferraris went, Gilles ahead by a couple of car lengths. Approaching Tosa however, and catching the Canadian unaware, Didier suddenly catapulted his 126C2 out of his teammate's slipstream to seize the lead. The Ferraris almost touched. The Imola crowd held its breath.

And that was that. The Frenchman had overtaken at the only feasible overtaking spot on the circuit. Didier Pironi duly led a Ferrari one-two over the line. Italy went crazy.

Far from celebrating a team triumph Villeneuve was incandescent. "The bastard stole my race!" fumed the runner-up. The recriminations had only just begun. It was civil war at Ferrari. Writing for Autosport, Nigel Roebuck penned an article entitled 'Bad blood at Maranello'. As far as the international sporting media was concerned this was a story of betrayal, wherein a villain (Pironi) had duped a hero (Villeneuve).

In the aftermath of the 'betrayal' Villeneuve sunk to the depths of despair. Two weeks later, the great Canadian was killed at Zolder trying to beat his French foe in qualifying. Pironi, they said, had as good as killed his teammate. Villeneuve, they said, went to the grave hating the Frenchman. Didier Pironi became an F1 pariah.

As ever with such narratives, the truth is however a little more nuanced.

The media portrayal of a dejected post-Imola racing driver is unfamiliar to long-time Villeneuve friend and confidante Allen de la Plante who Sedgwick interviewed for the book: "According to de la Plante, Gilles was not obsessing about Pironi after Imola - far from it. Rather all he could talk about was a very expensive helicopter he had just purchased."

Villeneuve's anger, it transpires, had been directed more at Ferrari management than his teammate. The Canadian felt that the team's pit crew had mishandled the situation at Imola. In an interesting twist, Sedgwick hints that events in the Ferrari pit that day might not have been solely due to negligence, inexperience or poor judgement, that proceedings might in fact have been orchestrated.

Certainly, it appears that there had never been team orders at Imola - a fact subsequently confirmed by the late Harvey Postlethwaite as well as Marco Piccinini, Ferrari's Chief Designer and Sporting Director respectively. Ferrari it seems, might have decided to purposely let the drivers fight it out amongst themselves.

"What happened at Imola can be put down to a major misunderstanding," says Sedgwick who has spoken to members of the Ferrari pit crew present that day. "Not unreasonably, Gilles assumed he had earned the right to win the race. But Ferrari management did not confirm this assumption. In fact by putting out 'SLOW' rather than 'OK,' their actions could be construed as being deliberately ambiguous."

Sedgwick's theory, and he stresses it is just that - a theory - is that the Ferraris were definitely racing, and racing hard; the data certainly suggests as much. Gilles basically fell for a sucker punch on that final lap. Didier caught him napping. Villeneuve had made a huge assumption, that the race was over. It wasn't. Not as far as Ferrari or Pironi were concerned.

In the days that followed, typically the international media emphasised the betrayal angle. It made for great headlines. While the Canadian's legend increased over time, the Frenchman's status as one of F1's bad boys became equally assured.

"Put very simply, Gilles had no authority to consider the race over," says Sedgwick. "He was genuinely surprised to see the sister car hurtling past him on that final lap, but as the dust settled I think he came to realise he might have been a little presumptuous as well as naïve.

"For someone to break an agreement," continues the author, "to 'betray' someone, first there must be an agreement. But there never were any team orders that day. Pironi always maintained - rightly so in my opinion - that the Ferraris were racing for position."

Hero or villain? The story of the 1982 San Marino Grand Prix will remain one of F1's most enduring controversies. One thing that is beyond dispute is the fact that 1982 turned out to be one of motor racing's saddest seasons, a year marred by acrimony and carnage.

As fate would have it neither protagonist, Gilles Villeneuve nor Didier Pironi, would see the season out to its conclusion. "If I have one hope for this book," says Sedgwick, "it is that Didier will finally be exonerated for what happened that day. It is time to lay the ghosts of Imola '82 to rest."

Pironi: The Champion That Never Was (paperback) is published on January 1st. The paperback and e-book is available on Amazon.