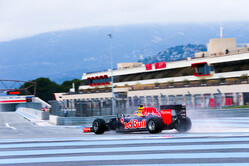 Glad to be in the news for his thoughts on Formula One, as opposed to the sartorial predilections of relatives, Lewis Hamilton has admitted that he thinks the choice of venue for the French Grand Prix is a poor one.

Having last appeared on the F1 schedule in 2008, France - the country which gave the world Grand Prix racing - returns to the calendar next year, forming, along with Austria and Britain, the sport's first-ever triple-header.

While Paul Ricard, unlike Magny Cours, was previously favoured by fans and drivers, Hamilton admits that he doesn't feel it to be a good venue for France's return to the calendar.

"Honestly I don't like it, just to be straight with you," he told Canal+' Thomas Senecal in an end of season review.

"I loved it when we used to have the Grand Prix in Magny-Cours," he continued, having twice contested the French Grand Prix at the Nevers track located in the centre of France.

"(Paul Ricard) is in a beautiful place, but the track, when I say I don't like it, it's not as great as Magny-Cours," he said.

"It's just, you know, France has so many beautiful, beautiful circuits, Le Mans, for example, and for some reason we don't have it at the most beautiful track.

"It doesn't register for me, I'm a driver and I'm dead straight with you, and I'm not gonna beat around the bush. But maybe we will have the best race of the whole season there."