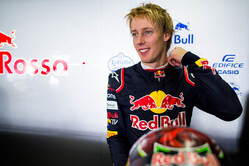 While Red Bull had a difficult season in 2017, Max Verstappen and Daniel Ricciardo both suffering more than their fair share of reliability issues, not to mention the unwanted attention of rival drivers, sister team Toro Rosso in many ways had it even harder.

Ahead of 2018 however, it's all change, the Faenza outfit swapping Renault engines for Honda - a move that will be keenly watched by Red Bull - and an almost new driver line-up.

"Also in terms of the car development, it was not what it should have been," he admitted.

"Now they are focused on next year and their cooperation with Honda. Since the announcement all their efforts have been going into that.

"The drivers? All the drivers the team started the season with were gone at the end!" he laughed. "Sainz is loaned to Renault; Kvyat is gone, so Toro Rosso had to restart in mid-season with two blank pages.

"I think for the circumstances Gasly and Hartley did really well," he says. "And the good news is that Brendon doesn't have to switch anymore between Porsche and F1, so I am sure for next season Toro Rosso has a very promising driver line-up."

Asked why Kvyat appeared to crack under the pressure, the Austrian said: "Unfortunately we don't know why. Maybe because of that we couldn't cure it.

"In his first year in F1 he was a revelation, often being quicker than Ricciardo, that's why we moved him to Red Bull. But then suddenly his curve started to run south.

"This happens sometimes unfortunately. We gave him more than one fair chance, but he could not use his potential. That's how it sometimes goes."

And then there's Hartley, the oldest 'rookie' on the F1 grid.

"I can only say Red Bull is different, so why not have a mature rookie? And we didn't have any of our junior drivers ready, so we started to look around.

"The fact is Brendon looks like a twenty year old, maybe we even could sell him as a teenager! Nevertheless, yes, hiring Brendon was out of the norm - a different story - and we are happy with him."

Asked how he compares to Kvyat, who was considered to be too much of a thinker, Marko replies: "Let's hope it was thinking! When you looked at his reading and music choices he was pretty intellectual."