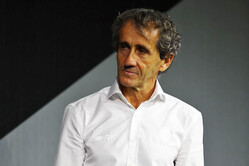 An 'advisor' to Renault, four-time world champion, and former team owner, Alain Prost, believes the French manufacturer's new partnership with McLaren will reap dividends for its own F1 team.

After three dismal seasons with Honda, McLaren has parted ways with the Japanese manufacturer and for the second time in its long history joined forces with a French engine supplier.

However, while most are focussing on how the move will pay off for the Woking outfit, Alain Prost sees positives for Renault's own team as it goes into its third season since returning to the sport.

"It will make pressure, for sure, because we will have one more competitor in our field," said the French legend, according to Motorsport.com, as McLaren becomes the third team on Renault's books, replacing Toro Rosso which will now partner with Honda..

"But we know that and we hope that it's going to be positive pressure," he added, "and it's a fact that we have to beat everybody."

Looking back on the Renault team's own season, which saw it take sixth from Toro Rosso in a last gasp effort in Abu Dhabi, he said: "If you make a summary of the season, sixth position is not too bad. At the end of the second part of the season we were very close to being most of the time the fourth team in terms of performance. We had reliability problems, and when you have reliability problems, you have to go down in terms of performance.

It's not an excuse," he insists, "but what we showed in Abu Dhabi was when we put everything together, with the pressure we had, we can manage to do it. If we wanted to, we could go a little bit more, but we also wanted to be a little bit safe.

"The gap to the front is still big," he admits, "but at least you start like this to make everything a little bit better. So it's very positive.

Hard to believe, especially from as team which regularly appears to be breaking the bank as it seeks to lure personnel from rival teams - and even the FIA - Prost claims the additional prize money for sixth in the standings - thought to be around £3.5m - will help.

"The money is important, because when you get more money, other teams get less! Also the fact is that the last race is very important, it gives the motivation to the people during the winter, they feel a little bit less pressure, they are happier to work."