Hamilton has winning mindset for 2018 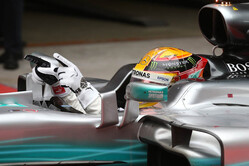 While it was Sebastian Vettel who drew first blood in the 2017 title fight, winning two of the opening three races, Lewis Hamilton hit back and having finally taken the championship lead at Monza, never looked back.

Despite the relatively shaky start to the season, the Briton insists that as early as Melbourne, his mindset was that he would win the title and looking ahead to 2018 nothing has changed.

"I have that same mindset now for next year," says the world champion. "When I'm training and preparing for a new season, I firmly believe that we can be contenders for the next championship. It may turn out to be not possible, but you have to have that mindset. If you go in with expectations of finishing fifth, it's not going to work. You've got to gear yourself up to win.

"Next year, McLaren will have Renault engines, then we may see four teams fighting for the championship," he admits. "I think Red Bull will be quicker and Ferrari for sure will be fast again. We can't stand still... we have to keep moving forwards.

"It's been an amazing season but by no means a perfect one," he adds, reflecting on 2017. "There are always areas you can improve on. I won nine races and Valtteri won three, but there are 20 races, and a perfect season is when you win every single one of them. But it's a positive thing, because it means you can always improve.

"Reliability has been the best it has ever been. In terms of my performance, my starts were much better this year, and I was much more comfortable with this year's car so that I was able to extract a lot more from it race by race."

For now though, the world champion can afford to take some much needed time out, recover from the battle won whilst preparing for the battles ahead.

Asked how he will spend his winter break, he reveals: "I go to the same place in the mountains every year. I have my dogs, I'm in the snow, and it's very quiet and peaceful there. I spend most of the day sitting by the fireplace. We go skiing, watch some movies and catch up with some TV series.

"I've never even seen any of Game of Thrones. My friends and especially my brother are huge fans, and I think I'm going to get into it in the winter."