Hamilton: Matching Fangio could be cool 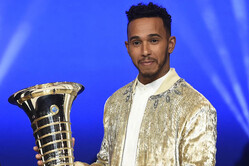 For as long as anyone could remember, Juan Manuel Fangio's record of five world championship titles seemed the impossible dream.

While a number had claimed three titles, when, in 1993, Alain Prost finally got to four it really did seem that Fangio's record might never be broken.

Then along came Michael Schumacher, who, following successive titles with Benetton, spent several years at Ferrari before it all finally came good, the German not only equalling Fangio's tally but setting a new standard.

Since then, we have seen Sebastian Vettel claim four titles and this year Lewis Hamilton joined that exclusive club.

Having set new records in terms of pole positions, points and various other categories including most races with a single engine manufacturer, with 2018 looking set to be another year of Mercedes domination, Hamilton could finally equal Fangio's tally. However, while the Briton admits it would be "cool" to match the legendary Argentine, he is not sure if he will remain in racing long enough to target Schumacher's record.

"I can't see it at the moment," he told reporters at Friday's FIA Awards ceremony in Versailles. "Four more? It has taken me ten years to achieve this four. I don't have that desire to match it... but matching Fangio could be quite cool.

"Given that I'm going to be here for at least another couple of years, that's my goal," he said of Fangio's record. "To try and at least get that.

"When I am older and look back, I don't think the amount of titles I have is going to define what I am as a driver or who I am," he insisted. "How I work with the team, how I drive the car, every time I drive the car and extract from the car, that's what I feel inside defines me.

"When I was young I thought I would have a family at 28," he admitted. "When I got to 28 it all shifted. But it is difficult to say never.

"Maybe in a couple of years' time, I'll be like 'Gee, I want to do another ten years', but I really hope that that's not the case, because then I'll be with you guys when you're in Zimmer frames."

Minded, that a year ago, Nico Rosberg had dropped his bombshell, Hamilton smiled and insisted there would be no repeats.

"I love the racing," he said. "There's definitely bits that I don't love about some of the surrounding stuff, but being in the car, and working with the team, there's nothing quite like it."