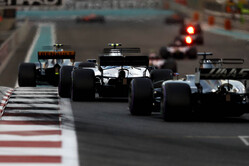 While Abu Dhabi is never going to produce a fitting season finale, certainly in terms of passion, the Middle East track should at least be capable of producing a race that will leave fans - and drivers - aching for the start of the new season.

Sadly, yesterday's tedium-fest was enough to send them into early hibernation.

Barring a couple of skirmishes further down the field, and a half-hearted 'I could do it if I really wanted to' reminder from Lewis Hamilton on his Mercedes teammate, the 2017 Abu Dhabi Grand Prix will go down as one of the worst 'races' in living memory.

Be it in the ante room before the podium ceremony, talking to Valtteri Bottas and Sebastian Vettel, in the post-race press conferences and in subsequent one-to-ones with the media, world champion Lewis Hamilton was in no doubt as to where the blame lay.

"I don't know if it was an exciting race for you guys to watch in terms of overtaking," he said at the post-race press conference, "but it's one of the worst tracks in the sense that you need 1.4s advantage to pass the car in front, and so, we've got the same car, we've a couple of tenths between us - so I was never going to overtake unless he made a big mistake and went off - and even then they have massive run-off areas and you can still keep it on."

"Yeah, I could feel that sector three was good for me, but also it's a track where it's really difficult to follow in sector three," added teammate Bottas. "Once you get close there, I could feel with the lapped cars, how much you lose.

"I knew that Lewis was always going to be struggling as he got closer to me in sector three. I think Lewis has been strong all weekend in sectors one and two but for sure I think also the slipstreaming can help in the long straights for sector two. But yeah, for me, I could really control the race, everyone knows here it's not easy to overtake."

Speaking to Sky Sports F1, while doing his level best not to give anything away, the sport's resident track designer, Hermann Tilke admitted that comments from Hamilton and his colleagues had been noted and that there could be a modification.

"We have an idea to change one corner," he said. "It's a very small change, but maybe it has a lot of impact for overtaking. We are in discussion."

"It's such a beautiful place here, everyone has such an amazing time," added Hamilton. "If there's any way we can improve this track to enable us to have these battles... you've got these long straights where you can't even get close enough to utilise them. If there's some way where we can enable us to be able to remain closer in that third sector, I think this will go up in the rankings of a great circuit. I don't know if they can do it but I know there's money to do it but I just hope... I have hope for Abu Dhabi to get better."