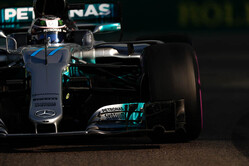 The ultrasoft was the tyre used by all the drivers from start to finish of the session, which began in daylight and then ended under the lights as the sun set. As usual here, track temperatures fell progressively during the session.

A one-stop strategy will be the quickest way to run tomorrow's race, especially with Yas Marina not being the easiest circuit to overtake on.

Mario Isola: "Qualifying went exactly as we expected it to: there wasn't a huge degree of track evolution and the lap record dropped further, with ultrasofts used from start to finish. The ultrasofts were in fact capable of more than one flying lap, which is why we saw some drivers alternating push laps with cool-down laps. We should see a one-stop ultrasoft-supersoft strategy for most drivers, but the low degradation also means that the pit stop window is pretty wide, so drivers should be able to make their stop more or less when they want to."