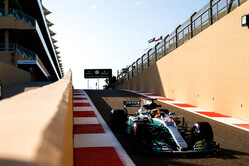 Sebastian Vettel topped the timesheets earlier in a session which saw the top five covered by just 0.735.

Largely uneventful, the session was also pretty much irrelevant due to the fact that it takes place in daylight in the afternoon, while qualifying and the race will be held at twilight when conditions will be cooler.

When we say uneventful, the cross wind caused problems for a few drivers, though only Grosjean came to any sort of grief, the Haas driver nudging the barriers with his rear wing after a spin.

The session witnessed the usual array of sensor devices and lashings of flo-vis as the teams took the opportunity to look ahead to next season.

Having handed their cars over to the reserves earlier, Esteban Ocon and Kevin Magnussen are in action this afternoon.

The lights go green and following a short wait Alonso heads out, followed by Magnussen.

The Spaniard was kept busy in FP1, or rather his crew was, the team trying four different set ups over the course of the ninety minutes.

Raikkonen complains of a vibration on his tyres, seemingly a recurrent problem for the Finn.

Going purple in the first two sectors, Raikkonen posts 40.224 to demote his teammate who had just posted 40.739.

Attention shifts from Ferrari to Mercedes however as Hamilton and Bottas begin their hot laps. Bottas posts 40.412 with Hamilton subsequently aborting his lap after running extremely wide in T8.

No such issues for Vandoorne who posts 40.224 to go second, the Belgian matching Raikkonen's time to the thousandth.

As Stroll does well to keep things under control after running wide in T20, Hamilton posts 39.720 to take the top spot.

All bar Vandoorne have posted their times on the supersoft tyres, the McLaren driver using ultras.

Hartley complains of way too much oversteer, leaving him struggling at the rear. Similar problems for Stroll and Verstappen. "I have no rear tyres left," complains the Red Bull driver.

"I've got a bit of a flat-spot," admits Sainz following a lock-up in T8.

A nasty high-speed spin in T20 for Vandoorne, which brings out the yellow flags as the Belgian is unable to re-start the car. Finally, after another couple of attempts he gets going and returns to the pits.

Hamilton was about to raise the bar having gone quickest in the first two sectors, when out came those yellows compliments of Mr Vandoorne.

No such issues for Ricciardo, who misses the yellows and improves to second with a 39.346.

A 40.694 sees Gasly improve to ninth, as Massa is the latest to complain of "big oversteer".

With just over an hour remaining, Bottas, Stroll and Hulkenberg are the first to switch to the ultrasoft rubber.

The Finn immediately goes quickest, crossing the line at 38.609, improving on his previous best by 1.1s.

Hulkenberg improves to fourth with a 39.529, as the Ferrari duo make the switch to the ultras.

As Hamilton goes quickest in S1, Stroll is told he needs to find more time on his first lap.

Losing time behind Grosjean, Ricciardo can only manage 39.186 which leaves him fifth. The Australian subsequently makes clear his frustration with the Haas driver courtesy of an expletive or two.

In the midst of all the excitement, Raikkonen has claimed third with a 38.352.

Spins for Grosjean in T19 and Vandoorne at T20. "It smells super hot here," says the Frenchman, "is everything OK?".

Verstappen is among the last to make the switch to the purple-banded rubber.

It's a scruffy lap from the Red Bull driver who fails to improve on his best time from the supersofts.

"I have no grip with these tyres, I don't know what's happening," admits Gasly.

Having improved by just fractions, a weary Verstappen says: "Forget it, I'm coming in."

Bottas is told he can brake a little bit later in T11.

With just over half-an-hour remaining, the focus is Sunday afternoon and the opening stint as the simulations are underway. Currently the order is: Hamilton, Vettel, Ricciardo, Raikkonen, Bottas, Verstappen, Perez, Ocon, Hulkenberg and Alonso.

Haas believes the smell that Grosjean encountered was down to an electrical issue.

A lock-up for Hamilton at T17 sees the Briton wide and having flat spotted his tyres he heads back to the pits. He is soon back on track again to continue his simulation, albeit on supers.

Bottas is unhappy at the pace - or lack of it - of Hulkenberg. "What is this guy doing?" asks the Finn. "He's just staying in front of you," comes the reply, "we'll have a word with Charlie, it's not good enough."

"I cannot hear you at all," claims Raikkonen after being given some instructions by his engineer.

Hartley's day goes from bad to worse as he loses the rear in T1. A strange incident even on replay, which sees the Kiwi head back to the pits.

Ferrari reveals that Vettel has completed 20 laps on his current set of supersofts. Indeed, a good mixture of ultras and supersofts being used at present.

Another very close thing for Ricciardo, this time involving Massa. The Australian subsequently makes short work of the Brazilian veteran.

Another strange incident sees Verstappen off at T11, his car seemingly of a mind of its own. 11 laps into his current run, the Dutchman appeared to suffer another nasty dose of oversteer.

"This is the worst tyre I've ever driven," says Hamilton of his ultrasofts, which appear to be those he flat-spotted earlier. Indeed, on-board coverage shows his steering wheel vibrating like crazy.

In terms of the top six it's business as usual, with just 0.017s covering them. However, Ricciardo, in particular is looking strong here... at least when he gets a clean lap.