Another penalty for Hartley 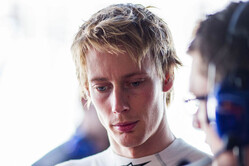 Not yet four races into his F1 career, Toro Rosso's Brendon Hartley is already a veteran in terms of grid penalties having taken them at every race thus far.

A 25 place demotion on his F1 debut in Austin was followed by a further 20 places in Mexico and 10 in Brazil.

Now, ahead of his fourth Grand Prix, the Kiwi has already been hit was a 10-place drop this weekend after his team elected to change the MGU-H on his car.

Indeed there could be further penalties for Hartley and his teammate Pierre Gasly, the Frenchman changing his MGU-H in Brazil only for it to fail again thus incurring a further penalty.

The demotion comes at a time the Faenza outfit is struggling to hold off Renault and Haas in the fight for sixth in the team standings, a fact that resulted in a bitter public spat between Toro Rosso boss Franz Tost and Renault's Cyril Abiteboul in Brazil.