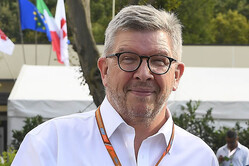 In the wake of Johan Godfried's analysis of this year's grid penalties, one can hardly move these days it seems for further breakdowns of one of the biggest blights on the sport at present.

No matter how you crunch the numbers, the fact is that grid penalties are damaging the sport, turning off die-hard fans and leaving newcomers totally confused.

The penalties were introduced in a bid to cut costs and spending, and while they might have had some impact in that sense, the ongoing damage they are doing to the sport is immeasurable.

With the number of allowable engines and components reduced even further next season, there will likely be even more penalties, and while nothing can be done in the short terms Brawn insists that the recently announced engine proposals for 2021 will go some way to ending the "farce".

Pointing out that penalties for changing the ICE (internal combustion engine) are dwarfed by those for components, he said: "What I think we should try to achieve with the new engine is componentry that is economic to change whenever you want.

"If we go towards a different design of turbocharger, an homologated turbo, and it costs $2,000 - $3,000, why would you bother to even worry about limiting the number you use?" he added. "It is not worth it in terms of the scale of the racing.

"But when your turbocharger is as expensive and complicated as it is now, then that’s why we have the limitations.

However, as has been witnessed in the reaction from Ferrari, Mercedes and Renault, the move to less complicated engines, not to mention introducing standard parts and possibly even standard components, will not come without resistance. Nonetheless, Brawn - architect of the double diffuser, to name just one of his many 'innovations' - believes the drive for improved technology must not compromise 'the show'.

Using the example of the WEC, he claims that the drive for ever dramatic technical innovation has come at a high price, with manufacturers now quitting the series.

"Sportscar racing has its fan following but even in the environment where the fans were not the biggest thing, it faltered and it failed. In this environment, where the fans should be the biggest thing, we can’t afford to have that sort of failure where we get so extreme we lose contact with the fans, because only a very few people can afford the technology and excel in the technology.

"We are four seasons into this technology and we are still getting so many grid penalties, because we can't get on top of the technology," he admitted. "And all credit to Mercedes. They have done a fantastic job. But no one else can catch up. That is the reality."

Fact is however, with the new formula not due to be introduced, until then it appears to be a case of; 'may the farce be with you'.