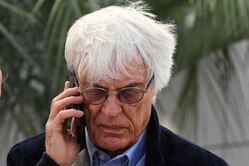 When a motorsport news publisher's non-executive chairman also happens to be executive chairman of a leading Formula One team, or at least a member of the controversial Strategy Group, it is natural that you are going to enjoy the occasional scoop.

Which makes it all the more surprising that in the 48 hours since Tuesday's meeting of the group, at which Liberty Media was due to unveil some of its plans for the sport's future, there hasn't been a smidgen of news. Not the merest hint, far less the scoop of the century.

Consequently, one must assume that the meeting proved so controversial that all involved have been ordered to keep schtum on pain of repercussions should 'exclusives' start appearing online.

It's understood that Liberty Media's plans for the redistribution of prize money - the most controversial aspect of the sport's new owners programme - was put on hold for the time being, with Liberty instead seeking to focus on budget caps.

Just seven days earlier the proposed engine rules didn't go down too well, with Mercedes and Renault voicing their unease and Ferrari warning it may leave the sport.

Remember, this was just about the engine rules, the big stuff, the really big stuff, such as the likes of Mercedes, Red Bull and Ferrari being told that their prize money is being drastically cut, is yet to come.

It would be absolutely pointless to try and second guess what happened on Tuesday, for besides the fact that there will be leaks over the Interlagos weekend, the major issue, that of prize money and bonuses, has yet to be discussed.

To add a little further spice to a weekend which should already provide plenty of action, Bernie Ecclestone will be popping in from his ranch, and the stirring won't be limited to the samples of his Celebrity Coffee he may hand out.

No, whatever Lewis, Max and Seb get up to on track this weekend, the real action will be taking place in the paddock.