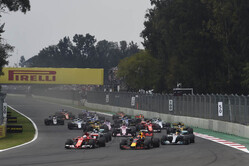 On the day F1 expects to hear the proposals for the new (2021) engine formula, proposals which could see new manufacturers enter F1, bring down costs, end Mercedes domination and improve racing, but on the other hand drive existing manufacturers and teams out of the sport, another ill wind is about to hit the paddock as it is revealed that the top teams could face losing up to £155m in prize money under proposals drawn up by Liberty Media.

Over the Summer, the sport's new owners pit together a document titled 'Opportunities for Future Growth'. According to The Independent, which has seen the document, one of the first proposals is to "complement free-to-air with competitive pay services."

This would end any hope of the sport's new owners going back on those Pay TV deals already agreed - such as in the UK where from 2019 Sky is the sole broadcaster of live coverage.

Another proposal relates to how to "monetize content across digital platforms, including OTT".

This refers to the OTT streaming service F1 is to launch - hopefully more reliable that the F1 Live Timing App - though this will probably not be available in the UK as Sky would likely challenge the move. OTT (Over The Top) will likely be streamed direct to subscribers 'over the top' of traditional broadcasters.

As Liberty looks to "increase number, optimize mix and enter new markets". next year's calendar will feature 21 races. However, the current contract allows up to 25 races and Liberty is hard at work putting such a schedule together.

It has already been revealed that Ross Brawn is considering reducing Grand Prix weekends to two-day event, a move it is claimed that would allow teams to save money and attend more races.

"I think we need to be careful not to add too many races to Formula One. I think it would be a long way to come to Mexico for two days. Or Australia for two days.

"I think the Friday gives the promoter the opportunity to bring more fans, more people into the sport. I thing perhaps what we do on Fridays could be a bit different. We could liven it up, we could make it more interactive. Maybe we only need one session on a Friday afternoon - but I would be concerned about going to just a two-day weekend because that would feel fairly short, perhaps too short and will inadvertently put more pressure back on simulations, that you're turning up prepared to hit the road running, and I'm not sure that's going to be a great balancer between the teams."

"We are working with all the teams now to look at budget control for the future and I think that is the way forward," said Brawn recently, "this creates a sustainable Formula One.

"The other important thing it does is it makes everyone more competitive because the difference between the guys at the front spending what they do at the moment, and the guys who are spending much less further down the grid, is reduced enormously."

It's understood that in 2016, Mercedes spent £274.9m in its bid to win the title, this compares with Haas which spent £94.9m on its way to finishing 8th in its debut season.

It is this spending war, and the resultant gap between the teams, that is driving the call for a budget cap, a move demanded by Liberty and some of the teams.

"What a budget cap will do is bring us closer," insists Force India's Robert Fernley, the figure currently being suggested being £122m ($150m).

As has been well documented, there are various bonuses handed to certain teams, which means that Ferrari, for example, receives £83.4m before the green lights go out in Melbourne.

Indeed, last year, despite finishing third in the standings, the Maranello outfit walked away with more prize money than championship winners Mercedes. Indeed, the Italian team picked up £42.8m more than its German rivals, while McLaren and Red Bull received £74.8m and £98.4m respectively.

Between them, these four teams received around 55.7% of last year's prize money which equated to £446.2m. However, if the bonuses were scrapped and the prize pot divided equally, this would reduce to £291.2m meaning a combined drop of around £155m for all four teams.

Speaking earlier this year, Liberty boss, Greg Maffei, suggested that if Ferrari's share of the prize pot was reduced it would improve the racing (?) which would in turn boost the Maranello team's sponsorship revenues.

"If you're Ferrari, you have enormous sponsorship revenue that goes directly to you," he said. "That's going to be impacted more positively by great races.

"So thinking about balancing the team payments, so they're a little more balanced and creates more fairness, has to be weighed, in Ferrari's mind, I would expect, by the fact that creating a great platform helps our sponsorship revenue, too, so there's give-and-take."

Naturally, Ferrari, and some if its fellow teams do not agree. Indeed, other than the threat to their bonuses, a number of teams are unhappy at Liberty's spending, citing the London Live event and Michael Buffer as the most obvious examples.

"If they want to turn F1 into a nonsense, a shopping channel, then I'm not the slightest bit interested," said Sergio Marchionne. "There is a very noble aspect to F1 beyond the things that happen on track; it's a sport which is truly different from the others and we can't over commercialise it. If they do that, we are off; no interest."

The teams are also concerned at the money Liberty has spent on new offices in London and the technical team being assembled by Ross Brawn, which includes a number of high profile former technical bosses. Indeed, earlier this week it was reported in the German media that Brawn is looking to buy a windtunnel having acquired the windtunnel model built by the ill-fated Manor team for aero data gathering purposes. The irony.

With this in mind, not to mention the uncertainty of the engine proposals, F1 is fast approaching what could be a watershed moment.

On both fronts, Chase Carey is about to discover why Bernie Ecclestone needed a dictatorial approach to dealing with the teams.

It would appear that the honeymoon is about to end.