Ecclestone's claims are nothing new 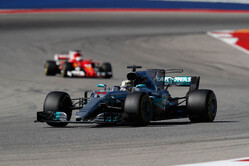 When Bernie Ecclestone told Italy's La Repubblica that Mercedes and Ferrari had colluded in order to give the German team a worthy opponent while at the same time flexing their muscles in terms of their power within the sport, both teams were quick to react.

"He's the only one who is able to sit on the other side of the world and throw a hand grenade and it actually lands in the paddock," Toto Wolff told Reuters.

"These stories are fantastic and I've missed them a little bit," he added. "I've missed the hand grenades and the pop-up meetings and the crisis situation and the rule and divide."

"I think that's what they call unadulterated hogwash," laughed Sergio Marchionne. "I think Bernie should be very thankful that Ferrari was at the table, and helped him turn the sport into as financially lucrative a position as it ultimately materialised for his personal use.

"God bless him," he added. "I like Bernie, a lot, but I think Ferrari has done as much."

While Mercedes and Ferrari would very much like us all to think that as he celebrated his 87th birthday, this was Bernie's way of doing a Grandpa Simpson and shouting at the sky, the former F1 supremo's claims are nothing new.

In a statement to Forbes last year, over the Bahrain Grand Prix weekend, Ecclestone said: "Ferrari, with help from Mercedes, have caught up. Well nearly.

"Between them supplying eight teams with engines that are not as competitive as theirs. They control the championship," he added. "The only competition is between Mercedes and Ferrari. Who knows what agreement there was or is for now to help Ferrari.

"They could have helped Renault," he admitted. "Again, I agree with Mr Marchionne. Why should they have to supply engines to a competitor like Red Bull? Solution - we need changes to the technical regulations in order to encourage an independent engine manufacturer with regulations that could produce an engine at a realistic cost for the teams."

This, of course, followed the move that almost saw Red Bull quit the sport, thwarted in its bid to secure an engine supply from Mercedes or Ferrari and eventually having to stick with a re-badged Renault.

While the move to bring in an independent engine supplier failed at the time, the writing was on the wall, and with an eye on the regulations due to be announced tomorrow it is hoped that more engine manufacturers will be encouraged to enter the sport.

Never a fan of the current formula which was introduced in 2014, and having previously delayed its introduction, Ecclestone notes that a leading light in terms of the formula was Ross Brawn, who at the time, alongside his role at Mercedes chaired the Technical Working Group (TWG) which proposed the regulations to the FIA.

"The problem is very simple," said Ecclestone in April 2016. "When the current regulations were perceived, no one at the time of putting those regulations together thought they would result in what we have, except maybe Mercedes, as at the time, Mr Brawn was within the FIA working group and was bright enough to see the potential for Mercedes. Well done Ross."