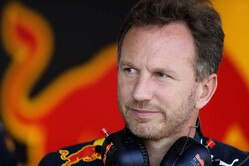 As Honda goes from bad to worse to Comical Ali, it comes as no surprise to hear that Christian Horner would be delighted to see the current engine formula dropped before 2021; after all, at present it appears the RBR15 will be regularly starting from the back of the grid courtesy of its new Japanese engine partner.

Asked if he would like to see the, as yet unknown, new engine formula introduced sooner than 2021, the Briton beamed.

"I'd love to see it come in next year," he admitted. "For me, these engines have done nothing but damage (to) Formula One: they've done nothing to contribute to the sport; they've taken away the sound; the passion; they've added too much complexity; they've become far removed from road car technology; they're effectively turning into diesel engines in some cases - and I can't see anything that they've contributed that's been positive, so the sooner it goes, the better.

"Unfortunately there's a contract between the existing manufacturers and the FIA that guarantees the engine will be in place until 2020," he added, "and I can't see there being sufficient motive amongst all the manufacturers to get rid of this technology and this power unit before 2021."

With provisional details of the new formula due to be announced next week, when asked what he's hoping to hear, Horner again smiled.

"I'd like to see a cheap, standard V12 engine at a 1000hp sounding fantastic, but I doubt we're going to get that," he joked. "But I think that... I think that what's potentially going to be presented sounds sensible.

"I don't have any hard details," he admitted. "It seems like it's the first significant move by Liberty about laying their stall out for the future. And of course that power unit is a crucial part of what Formula One will be for the next ten years, from 2021 onwards.

"Having seen the agenda for the meeting it looks like they have a plan and it'll be very interesting on the 31st to understand what those plans are."

Sitting beside him, when asked if he really believes Honda can get its act together, having seemingly deteriorated even further in recent weeks, Toro Rosso boss Franz Tost, said: "They have another year, or another winter time where they will for sure have the possibility to sort out the problems, which they have currently, and we, from Toro Rosso, are working as the only team together with them, and I think this will become a big advantage for us, and all the meetings we had so far are quite promising.

"I'm more than convinced this power unit will help Toro Rosso next year to become a very strong and competitive team," he added, though it was unclear whether he had his fingers crossed at the time. "More problems we can't have because we anyway changing every weekend the power unit."

Check out our Saturday gallery from Mexico, here.