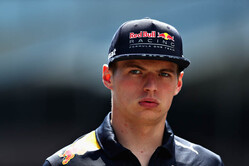 Having been handed a time penalty which demoted him from third to fourth for exceeding track limits and gaining an advantage, without naming a particular individual the Red Bull driver accused one of the stewards of being an "idiot" and "mongol".

In the wake of yesterday's FIA press conference in which he still refused to name an individual steward but insisted the punishment was wrong, the Red Bull driver took to Instagram to post an apology.

"Further to what I said during the FIA press conference earlier today, I would once again apologise for the language that I used following the US Grand Prix," he wrote.

"My comments were made in the heat of the moment, I know that the words I used were inappropriate and they were not directed at any one person. I certainly did not mean to cause any offence and I hope we can move on and enjoy this race weekend."

Earlier in the day, Race Director, Charlie Whiting, who twelve months ago was the object of Sebastian Vettel's ire here, had suggested that Verstappen apologise for his outburst, having previously explained the reasons for the youngster's Austin penalty.

"Seb, for his little outburst last year, he did apologise profusely," Whiting told reporters. "I haven't heard any such apology just yet from Max but it would be nice if he did."

Referring to Garry Connelly, the Australian steward who, though not named, is widely thought to be the object of Verstappen's anger, and that of his team boss, Christian Horner, Whiting insisted that there is no bias, as suggested last week. Horner's claim is based on the fact that Connelly has been on duty for several races where Verstappen has been punished, not least last year's infamous Mexican Grand Prix.

"I think the statistics I have seen don't paint the correct picture," argued Whiting. "It is just coincidence that Garry happened to be there.

"You cannot tie the two together," he continued, "I know Garry well and a more honest and scrupulous person you could not ever come across. Any sort of idea that he may 'have it in' for a driver is wholly unfounded.

"We have a set of guidelines, for the stewards, and they have all the events, whether the event occurs in FP1, qualifying or race, what the penalty should be," he added. "The guidelines are there to help stewards be consistent. It will tell you exactly how many points should be awarded if you do this. A reprimand for this and no penalty points, for example.

"So we go to quite considerable lengths to make sure decisions are made consistently," he insisted. "There is this difference between reality and perceived reality, but I don't think there is anything in that at all."

Check out our Friday gallery from Mexico, here.