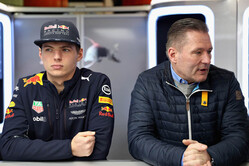 In the aftermath of the time penalty which saw Max Verstappen demoted from third to fourth, it is understandable that the youngster would hit out.

Other than the points, and his fourth visit to the podium of the year, the Red Bull driver was clearly frustrated at having been shown up to the ante room ahead of the podium ceremony, only to be subsequently given his marching orders in favour of Kimi Raikkonen.

At the same time Verstappen was learning the news, team boss Christian Horner was questioning not so much this particular incidence but rather the inconsistency of FIA stewarding and how the regulations are applied.

Without naming him, Horner suggested that it was no coincidence that one particular steward appears to have form, claiming that the youngster has been punished by the same official on numerous previous occasions.

Verstappen, however, not for the first time that afternoon, exceeded the limits, by pointing the finger directly at Garry Connelly.

"It's one idiot steward up there which always makes decisions against me," he told Sky TV. However, in subsequent interviews with Dutch broadcasters he referred to Connelly as a ‘mongol', leading to fears the Red Bull driver will face some form of punishment in Mexico this weekend.

Talking to Dutch TV show Peptalk, Verstappen has attempted to calm the situation, admitting that he was emotional when he spoke, caught up in the heat of the moment.

"In the heat of the moment you say things," he said, "but of course I didn't mean anything bad. At that moment, it just blurts out. I didn't mean to hurt anyone."

The youngster, like many within the paddock, and fans, believes the whole stewarding process needs an overhaul in terms of consistency and transparency, after all, only one driver was punished for exceeding track limits all weekend, and in the penultimate corner on the final lap.

"I think more people want that," he said. "I think it wasn't correct and it's ridiculous that you can't do anything against it," he added, referring to the fact that he cannot appeal Sunday's penalty.

"We'll talk about it, but we need to see what's right. I don't have a clear answer to that right now."

Asked, if a 'clear the air' meeting with Connelly might help, he said: "I don't have anything to explain. You can sit down with each other and talk for hours, but it doesn't change anything."