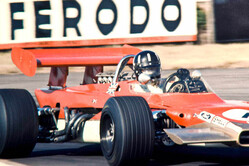 Over the years, F1 has tried 4WD on a number of occasions, most notably 1969, when the Lotus 63 (pictured), McLaren M9A and Matra MS84 were all run but with little success. Indeed, over the entire history of the Formula One World Championship, only 8 4WD cars have made it to the grid, the most recent being the Lotus 56B of 1971.

In 1982, Williams had the FW08B, a six-wheeler with two un-driven wheels at the front and four driven wheels at the rear. However, due to fears that the move would drive up costs it was banned and never raced, the FIA ruling that in future cars could only have four wheels and of those only two could be driven.

With support from Mercedes, 4WD is being considered once again, albeit using motor-generated KERS.

"Technology is important," says Toto Wolff. "If there is an emphasis on maybe not having the -H any more, the heat recovery any more, how do we compensate for 60 per cent of electric energy that is being lost?

"There are various possibilities and front motors is one possibility," he adds. "It's not that we are absolutely stuck on implementing front motors but we have to discuss all possible technologies that can compensate for the lack of power.

"Four-wheel drive is entirely doable," agrees Gene Haas, "but like anything else, the details are the math involved.

"We're talking to Ferrari a little bit about that and they basically came back and said, well, if we get rid of the heat generator and exchanged that for a front-wheel drive regenerative motor, then there simply wasn't enough energy to be recovered.

"So you have to be careful," he admits. "It's the same trap Formula One got itself into when it selected this engine. It seemed like a simple idea but when you started doing the engineering it became very, very complex.

"Caveat to Mercedes, they got it right. The other teams struggled for a long time. So, I think we have to be very careful before we say "let's just throw a four-wheel drive car out there," because it could be another one of those ones where one team will probably hit a home-run and the rest of us will be struggling with trying to catch up with that. I think simple's better."

And if anyone appreciates the purse strings side of the business, its Force India.

"All technologies are welcome," says Robert Fernley, "but I think it's also the key element of what we're looking at from the engine point of view is to keep the cost down.

"So, if going to four-wheel drive or whatever combination we have of that is going to increase cost, then it defeats the object of where we're going."

"We don't yet have a strong technical view," says Zak Brown. "I think we're more focussed on the criteria that we discussed earlier, as far as budget and competitiveness. I think that needs to be addressed. And then what technologies you use within those parameters, I think is to be discussed at a later date but we're certainly not opposed to four-wheel drive."