"No let off in our vigilance and attention to detail," warns Wolff 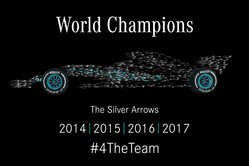 "Austin was a very special weekend for our team," admits the Mercedes boss. "The headline was the fourth consecutive championship win - a very proud achievement for every single one of us. But just as important was the way we won the race, claiming pole position and then controlling it from the front, after passing our direct rivals on track.

"That kind of performance confirmed we are continuing to develop the car in a good way - and applying the learning from our difficult days, to iron out the inconsistencies we saw earlier in the season. Lewis is doing a superlative job, and we saw he was in control of the race at every single point. Valtteri got swallowed up by the cars that converted to two stops, but he showed very strong pace during the grand prix and took another step forward in how he was using the car. There is still more to come from him.

"Although the constructors' title is now secure, we are only halfway to hitting our objectives for the season. When we set our targets at the start of the year, it was to become the only team to win both championships across a major regulation change. We now have to complete that job with Lewis, who is in the best possible position with three races remaining. We know that anything can happen in this sport, and that the tables can be turned on you very quickly. So there will be no let off in our vigilance and attention to detail in these final rounds. We will be racing to win.

"Our target may be clear - but it will not be easy to achieve this weekend in Mexico. This is an unusual circuit where the cars run at maximum downforce owing to the high altitude. Some of our most difficult weekends this season have come with the car running at maximum downforce, so we expect a tough and close-fought battle with both Ferrari and Red Bull. It will be important to be at the very top of our game if we want to get the job done."