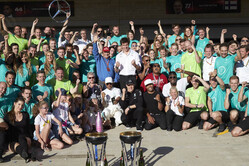 How does it feel like to be world champions? Well, it never gets old, that's for certain! No matter whether it's your first title, or a repeat experience, every single time brings with it a unique cocktail of emotions. A mixture of delight, pride and humility - savouring an objective achieved, yet already looking ahead to the next challenge to be tackled.

As the team emerges from a night of celebration in Austin, and prepares to recognise its achievements back at base in Brackley and Brixworth, we turned to some of our leading lights to try and capture this incredible, intoxicating feeling in words.

"It is an awesome achievement - and it has been a tough year," smiled Andy Cowell, Managing Director of Mercedes-AMG High Performance Powertrains. "Ferrari have been formidable opponents and that has been energizing for all of us. Everybody has raised their game, pushed really hard and been driven to make sure that we secure another championship. The effort that goes in at the factories - day in any day out, seven days a week - is very humbling to see, and that's what puts this total car together and delivers these results."

While the focus of fans and media is, quite naturally, on the battle between the gladiators of our sport, the fight between the teams for the constructors' title is just as intense. And while a team's effort is expressed through the car and engine it produces, the reality is that these machines embody countless hours of creativity, inspiration and diligence by a team of hundreds behind the scenes. They are the expression of a team's desire and determination to succeed.

"Fans know this is a complicated sport," acknowledged Technical Director James Allison. "But only the people in the teams really understand how many people have to do their job exceptionally well to make a result like this possible. And you don't just have to do your job right once, it has to be right every two weeks for the lion's share of an entire year."

The challenge of 2017, of course, was magnified by the rule changes coming into the new season. They had the objective of speeding up the cars but also of shaking up the competitive order. So to come out on top after such a test of the team's mettle is even more rewarding.

"When we set our objectives, it was to win both championships and to be the first team to do it through a regulation change like this," continued Toto Wolff. "To achieve it here in Austin with three races to go feels unbelievable. The fact is that we have a really great dynamic in the team, we enjoy doing what we do and bringing it home feels just super."

"This regulation change was designed to make it incredibly difficult to win again," agreed James Allison. "So to do something that no team in the sport's history has ever managed - to stay in the mix, and to come out on top, after a major rules change - is just the most enormous credit to everybody involved in the team from top to bottom. It is simply not possible to win a championship without their skill, dedication and, in many cases, sacrifice. It is a truly brilliant feeling to be part of a team capable of doing this."

Not only has this been a year of accomplishment but also of profound learning. We have experienced not just highs like Austin but the lows of weekends such as Monaco. Yet they have proven a source of new strength.

"We have a motto in our team: Difficult days are the days that our competitors will regret," explained Toto. "The painful experiences just make you so much stronger. If you keep calm, analyse what happened, and try to improve, it's just adding to your knowledge and adding to your strength. We've seen that happening all through the years, particularly this year we've had those painful experiences, and they are part of the development of the team."

"The team effort, the combination of Brackley, Brixworth and all the individual departments and teams, they're all focused on one thing: making the race car as quick as possible in qualifying and over the race distance," concluded Andy Cowell. "It is that tireless, relentless obsession that pays off and that's what binds us together."

Yet, while the team savours a first championship of 2017, nobody has lost sight of the fact that we have completed only half the job so far. Our ambition - and our clear intention - is to become four-time double world champions and to make sure Lewis seals his own fourth world title in style.

That quest continues in Mexico next weekend...