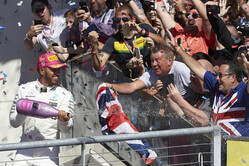 Today's 75th Formula One victory for the Mercedes-Benz Silver Arrows sealed the fourth consecutive Constructors' Championship for the team. Lewis raced to his 62nd career victory today - his fifth at the Circuit of The Americas and ninth of the 2017 season. Valtteri finished today's United States Grand Prix in P5. Lewis (331 points) leads the Drivers' Championship by 66 points from Sebastian Vettel (265 points), with Valtteri (244 points) a further 21 points behind in P3 and with 75 points remaining to be scored in the 2017 season. Mercedes-Benz Petronas Motorsport (575 points) lead Ferrari (428 points) by 147 points in the Constructors' Championship - an unassailable lead with three races remaining in the 2017 season.

Lewis Hamilton: Firstly, I want to say big congratulations to everyone in the team - both back at the factory and here. There has been an incredible push for this kind of performance this year. We really pulled together more than I have experienced and seen over the last five years to create something quite special. I'm really proud for everyone, especially going from one era of car to another which is something that has never been done before. It shows the strength of the team and I'm proud to be part of it. The race was great, it was probably one of the most fun races that I have had for a while - and there were quite a few fun ones this year. I didn't get away to a great start, but I was kind of chilled about it, knowing from the past that I can overtake here. I had a lot of fun trying to get closer and overtaking. Today the wind changed 180 degrees and it made the track so special to drive; the car felt amazing going through the Esses. We have three more races left this season - and that's three I want to win.

Valtteri Bottas: Today was a tough day for me. In the first three quarters of the race, everything was going quite well and the pace was not bad. However, I couldn't make the one-stop strategy work with all the fighting with Sebastian and Kimi in the second stint. That was wearing the Soft tyres off quite a bit, they started to go and it simply was not possible to stick to just one stop. I tried everything I could to defend, but it was too late, so unfortunately we had to pit again. I'm still disappointed with my race, and I will need a few moments to get over it. However, I'm also happy for the Constructors' title. It is amazing to be part of this championship-winning team.

Toto Wolff: The first words today go to our team - in the factories in Brackley and Brixworth, as well as the fantastic support we receive from Mercedes-Benz in Stuttgart. I am so proud of what has been achieved: winning across a rule change, something has never been done before in the sport, and doing it because every team member has dug deeper to find performance, been even more diligent on reliability and this has come together in the most special way. We had the quickest car out there in the race today - Lewis did a faultless job, picking off Sebastian and then managing his one-stop strategy to perfection. Valtteri had a tougher time: running in dirty air meant he couldn't convert his good pace into what would have been a deserved podium finish. But overall, we must be satisfied that we have got half of the job done today; one title down and one more still to win. Our target must to be to keep our foot on the gas and win each of the next three races.

James Allison: You can't argue with any race where you overtake on track for the lead and then romp off to the win. It was a brilliant drive by Lewis and a very welcome tonic to some of the narrative that had built in recent weeks suggesting that the momentum of the development race had shifted towards our competitors. This car, team and our drivers showed themselves today to be worthy, worthy winners of the Constructors' title. For a long time, we looked to be on course for a comfortable podium with Valtteri, too. He enjoyed a strong first stint and looked set to take second place from Sebastian for a significant portion of the race. However, in the second stint we were not able to make the tyres last well enough to help the one-stop strategy pay off. Nevertheless, he still scored the points we needed to secure the title at the first time of asking, and he will certainly enjoy even stronger races in the future.