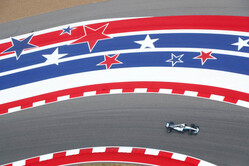 Lewis Hamilton: It's been an interesting day with lots of ups and downs in terms of how the track has moved around and how the car feels. But overall the car was feeling good. There are lots of areas we can improve on, but generally it feels like a solid platform and a solid start to the weekend. It was amazing to have so much support at the fan signing today and also arriving at the track yesterday. I seem to have a lot of support out here, which I am super grateful for. I'm excited to see everyone tomorrow.

Valtteri Bottas: The first practice was compromised by the weather. We struggled to get many laps, and I also flat spotted at the tyres in FP1 quite badly, so we had limited running. But in second practice we got a lot of running done, both short runs and long runs. So in the end, we got everything from today that we needed. Setup-wise I think we have the usual work to do. Overall, it has been a pretty normal day. I enjoyed today, but I'm hoping there is more to come tomorrow. Hopefully it stays dry over the weekend, it would be nicer for the teams and the fans.

James Allison: That's a promising start to the weekend. We have plenty of areas to improve, but we are generally quite happy with the car on all the rubber and both fuel loads. However, we are also conscious that Ferrari had a bit of a troubled day today, so maybe we haven't yet really seen where the opposition are at. I'm sure Valtteri will settle into the car a bit more overnight and we'll get it more to his liking. The early promise is of a decent weekend.