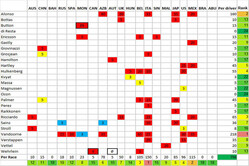 We are indebted to regular reader Johan Godfried - a man with clearly far too much time on his hands - for the spreadsheet pictured.

It reveals that to date, the 2017 F1 season has seen drivers collect 798 grid penalties between them.

Leading the way, as one would expect, is the McLaren duo, with Stoffel Vandoorne being demoted a total of 218 places and teammate Fernando Alonso 160. Indeed, though he was only in the car for one weekend, even Jenson Button picked up 15.

Surprisingly, though maybe not considering his last two weekends, Daniel Ricciardo (65) is third, ahead of Hulkenberg (55), Palmer and Hartley, both on 45, though the Kiwi's were mostly inherited.

In terms of engine manufacturers this works out at 393 for Honda, 304 for Renault, 68 for Ferrari and 33 for Mercedes.

In fairness, not all these grid penalties were down to engines, some were due to an infringement during qualifying, impeding or whatever, and these are marked in yellow. Then there are those penalties handed out for naughtiness in a previous race, these being marked in blue.

Stripping these out to leave only engine component and gearbox penalties reduces the grand total to 765, nonetheless, with 215 Vandoorne still leads the way from Alonso (160), Ricciardo (65) and Hulkenberg 55.

At the same time it reduces Mercedes to 25, Ferrari 60, Renault 290 and Honda 390, the Japanese manufacturer racking up 50% of the grand total.

And when one considers that Mercedes, Ferrari and Renault each power three teams and Honda just 2 cars...

All of which must leave Toro Rosso, and indeed Red Bull, hoping against hope that Honda takes a massive step forward in the months ahead… and that the 2021 engine regulations about to be announced are enough to encourage more manufacturers into the sport.