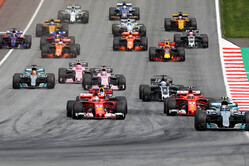 In the presence of FIA President Jean Todt, representatives from the FIA, FIA Formula One World Championship Commercial Rights Holder (F1) and current and potential Formula One manufacturer representatives met today, 31 October, in Paris to discuss regulations for the 2021 Power Unit.

In line with the objectives outlined by the FIA for the future of these regulations, which include a reduction in cost, maintaining road relevance with hybrid technology and improving the sound of the cars and the appeal for the fans, manufacturer representatives were presented with a roadmap for the development of the next generation of regulations.

The proposals shared today have been developed jointly by the FIA and by F1 using data and input from teams, power unit suppliers and outside experts, and the overall framework for the 2021 power unit definition will be in place and published by the FIA at the end of 2017.

In order to uphold the objective of cost reduction, work will continue over the next 12 months to define certain elements of the Power Unit, but the design and development of the complete Power Unit will not be possible until all the information is released at the end of 2018. This aims to ensure that manufacturers continue to work on the current specification Power Unit.

During the remaining part of 2017 and 2018, the FIA and F1 will also work with the teams to establish power unit test and development restrictions as well as other cost containment measures.

Manufacturer representatives were presented with the vision for the key new features of the 2021 Power Unit proposed by the FIA and F1. These are as follows:

A series of meetings will now commence with all the interested parties to discuss and develop the proposal in the spirit of the widest possible cooperation.

"Today was a key step in the development of the Power Unit regulations for 2021," said FIA Secretary-General for Sport, Peter Bayer. "The FIA has been working with the Commercial Rights Holder to define a positive step forward for these regulations which maintain Formula One's place at the pinnacle of motor sport technology whilst addressing the key issues facing the sport such as cost, road relevance and fan experience at the racetrack. We felt it was important to bring the teams into the discussions today and explain the direction we are taking and I'm pleased with the response we have received."

"The 2021 power unit is an example of the future way the FIA as regulators, F1 as commercial right holders, the teams and the manufacturers as stakeholders will work together for the common good of the sport," added. Formula 1, Managing Director, Motorsports Ross Brawn. "The proposal presented today was the outcome of a series of meeting which took place during 2017 with the current teams participating in the FIA Formula 1 World Championship and the manufacturers who showed their interest to be part of the pinnacle of motor sport.

"Also, we've carefully listened to what the fans think about the current PU and what they would like to see in the near future with the objective to define a set of regulations which will provide a powertrain that is simpler, cheaper and noisier and will create the conditions to facilitate new manufacturers to enter Formula 1 as powertrain suppliers and to reach a more levelled field in the sport.

"The new F1 has the target to be the world's leading global sports competition married to state of the art technology. To excite, engage, and awe fans of all ages but to do so in a sustainable manner. We believe that the future power unit will achieve this."