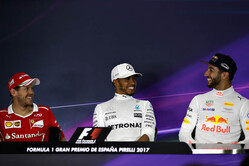 The mutual back-slapping that accompanied the opening races of the season went out of the window in Azerbaijan, when Sebastian Vettel got a touch of the red mist and gave title rival Lewis Hamilton a gentle nudge to speed him on his way.

As the season developed, the incident seemingly forgotten, though Vettel's season went from bad to worse there were still signs of the mutual respect we'd witnessed earlier in the year.

Whether that has stood the test of time remains to be seen, though we should get a good idea tomorrow when the Mercedes and Ferrari drivers are scheduled to attend Part 1 one of the official press conference.

Keeping them company will be mischief maker in chief Daniel Ricciardo, who may well wish to ask Vettel about Hamilton's claim earlier this week that in the wake of the Baku incident he warned the German never to disrespect him again.

While we can expect laughs on Thursday, especially in Part 1, they will be few and far between on Friday when Maurizio Arrivabene, Christian Horner and Toto Wolff are sure to be given the third degree on various matters, not least prize money, bonuses, Liberty Media and how they see the sport moving forward and whether their teams will still be involved.

Part 2 should be a little less tense, with Cyril Abiteboul joined by Zak Brown and Mario Isola.

No doubt the Frenchman will be asked about his spat with Toro Rosso in Brazil while Isola will be keen to talk about his company's 2018 tyre range due to be unveiled this weekend and tested next week.