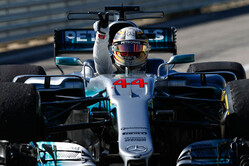 Lewis Hamilton admits that celebrating his title win too hard after wrapping it up in Mexico subsequently impacted his performance in final races.

Having secured his fourth title in Mexico, the Briton crashed out in the opening phase of qualifying in Brazil, while in the season finale in Abu Dhabi he finished second to teammate Valtteri Bottas.

For many, the relative drop in form echoed 2015, when, having secured the title in Austin, the Briton lost out to teammate Nico Rosberg in the final three races of the season, allowing the German to build a momentum he carried into the following season.

"There is zero concern for me," said the Briton. "It is clear that something happens when you win the championship, and in the week after I won the title in Mexico I partied a lot.

"That is what you do," he admitted. "I still drove relatively well, but I would not say I was at one hundred per cent, as I was during the rest of the season. My sleep and energy has definitely been different at these last couple of races.

"I have tried to approach them in the same way, but if you do not prepare properly, you do not get the right results. I am not bothered about that. Next year it will go back to how it was in the second half of the season."

Fact is, despite the mistake that saw him crash out in Q1 in Brazil, next day the Briton produced one of the drives of the season, while in Abu Dhabi, few seriously believe the world champion couldn't have put a concerted attack on his teammate together if he had really wanted to.

Indeed, if Interlagos and Yas Marina was Hamilton in 'Alka Seltzer recovery mode', one dreads to think what 2018 has in store when the Briton is once again firing on all cylinders with a car and engine package that is still the class of the field.